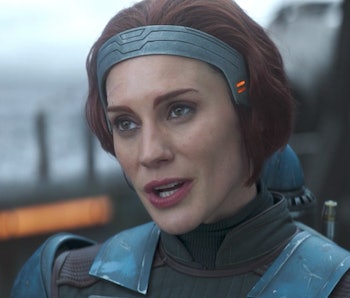 Where did you dig up that old fossil! When Han Solo said this about Obi-Wan Kenobi, guess how old "Old Ben Kenobi" actually was?

Assuming Obi-Wan was 25-years-old in The Phantom Menace, that means he was only 57-years-old in A New Hope. Basically, this means that Han, Luke, and everyone else was ageist as hell. On top of that, Obi-Wan Kenobi looked way older than he should have. Now, in fairness, Alec Guinness was 63-years-old when he played Obi-Wan, but he was clearly made to look even older.

Either way, the idea that Obi-Wan was considered old and feeble even though he was middle-aged is something Star Wars fans are thinking about again, mostly because the reappearance of Bo-Katan in The Mandalorian stands in stark contrast to how other characters are sometimes treated after a little time has passed. Here's how Bo-Katan has corrected a Star Wars tendency to treat anyone over 40 like they're dead, and also makes us really wonder about poor Obi-Wan.

Warning! Spoilers ahead for The Mandalorian Season 2 Episode 3.

After Bo-Katan's (Katee Sackhoff) return on The Mandalorian, it's hard not to notice that, relative to Obi-Wan Kenobi, Bo-Katan seems to have aged... well... normally. Depending on how old Bo-Katan was in The Clone Wars — maybe in her early 20s? — it's a pretty safe bet to assume she's in her 40s or early 50s in the era of The Mandalorian. In real life, Katee Sackhoff is 40 years old, so this mostly checks-out. But if you look at Obi-Wan looks in the prequels versus the classic trilogy, it feels weird.

A post in The Mandalorian subReddit pointed out how strange this is, by putting side-by-side depictions of both characters from The Clone Wars and the relatively similar time period of A New Hope and The Mandalorian.

The differences here are pretty striking and highlight a strange tendency in Star Wars that has (thankfully) been overcome by Bo-Katan's appearance on The Mandalorian. Not only was the 57-year-old Obi-Wan treated as decrepit, but both Leia Organa and Luke Skywalker were similarly relegated to "old person" status in the sequel trilogy. Mark Hamill is 69-years-old now, which means he was roughly 65 when he was doing The Force Awakens and The Last Jedi. That said, Luke was only supposed to be about 53-years-old, which means Leia was probably only 54-years-old when she appeared to die of exhaustion. (IRL, Fisher was only 60 when she tragically passed away.)

Just to be clear, in Star Wars terms, this means Luke and Leia were only about ten years older than Bo Katan is in The Mandalorian time frame (9ABY) when they both died from over-exertion. Now, you could argue that what Luke, Leia, and Ben Kenobi all have in common is tremendous amounts of access to the Force, which might prematurely age them. Obviously, there are real-world considerations too, but everyone can agree that Mark Hamill looks significantly younger without his beard, right now, than he does in The Last Jedi or The Rise of Skywalker. The narrative of these movies — like Obi-Wan in the classic films — is designed to reinforce the idea that Luke and Leia are super old even though they are in their early 50s.

Either way, there's not like a shock of grey in Bo-Katan's hair, and she doesn't act like a weathered old person. That's because, any way you slice it, she's not old. The thing is, the same was true for Ben, Leia, and Luke, but the stories were constructed to make it seem otherwise. Star Wars canon can't account for why actors look the way they do IRL, but up until this point, it's demonstrated a bias against people who are approaching middle-aged. Bo-Katan seems to fix that.

When Luke met Obi-Wan in A New Hope, he said "Oh, he's not dead, not yet." This was prophetic in the film, but strange when we consider how young Obi-Wan actually was at that point. Star Wars shouldn't be some kind of weird version of Logan's Run where people have to die when they are 50. But, up until now, that's kind of what's always happened.