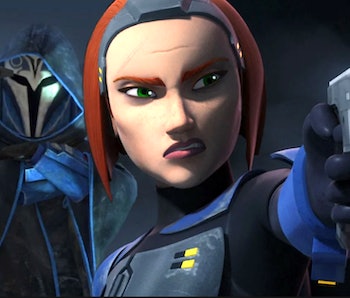 In a great bit of Star Wars casting news, science fiction living legend Katee Sackhoff (Starbuck from Battlestar Galactica) will don Mandalorian armor and reprise her role as the warrior Bo-Katan Kryze in The Mandalorian Season 2. Right now, this news has not been confirmed by Lucasfilm (much like the much-discussed Rosario Dawson casting as Ahsoka Tano). If true, Bo-Katan, could finally explain the mysterious Mandalorian code known as "the Way" could finally be explained, and this whole business with Moff Gideon's Darksaber.

Here's two big reasons why Sackhoff's return as Bo-Katan will finally make the links between Rebels, Clone Wars and The Mandalorian stronger than beskar steel.

According to Slashfilm, Battlestar Galactica star and Star Wars veteran Katee Sackhoff will join the cast of The Mandalorian for its second season. Sackhoff reportedly filmed her scenes before the global pandemic, and may already have finished filming her role for the Disney+ series. So, if Sackhoff's Bo-Katan does appear in The Mandalorian Season 2, will she take her helmet off? Will she then explain the origin of The Way?

2. Bo-Katan could be key to every Mando mystery

In Rebels and The Clone Wars, Bo-Katan is a formidable warrior who actually hails from the planet Mandalore, unlike Pedro Pascal's Din Djarin. For a brief time, she was part of Death Watch, a group that opposed a peaceful direction for Mandalore. After Darth Maul took control of the group, Bo-Katan teamed up with the Jedi and the Republic to stop Maul.

In Rebels — set nearly a decade and a half after her appearances in The Clone Wars — Bo-Katan appeared with her longtime Mando comrade, Ursa Wren, Sabine Wren's mother. By the end of Rebels, Bo-Katan became the most recent Mandalorian to rightfully wield the Darksaber, an ancient blade constructed by the only Mandalorian Jedi ever, Tar Vizsla.

What does this have to do with Mando Season 2? Moff Gideon has the Darksaber at the end of the Season 1 finale. So how did he get it? If Bo-Katan appears, you can get she's going to explain how Gideon stole her Darksaber.

1. Bo-Katan could explain The Way

Bo-Katan can also explain the origin of "the Way," the Mandalorian code we see throughout the show. Bo-Katan is older than Din Djarin by roughly two decades, and yet, she takes her helmet off all the time. What changed in those twenty years

We hoped The Clone Wars finale would clear this up, but we're still totally in the dark. Essentially, the Mandalorians of Rebels and Clone Wars are totally different from those in The Mandalorian. If Bo-Katan does not take her helmet off, there might be some explanation. Also, if Ahsoka appears and crosses paths with Bo-Katan, she might simply ask: "Hey, why don't you guys take your helmets off anymore?"

It's possible Mandalorians from Clone Wars and Rebels might have already appeared on The Mandalorian in secret. The Armorer who helps Mando with his weapons and armor could secretly be Bo-Katan's old buddy, Ursa Wren. Faceless members of Clan Kryze and Clan Vizsla could be hiding in plain sight throughout. In fact, the large, Heavy Infantry Mandalorian who fights with Mando (and then later helps him) is named "Paz Vizla." Basically, it's possible that he is part of Clan Vizsla, but that they dropped the "s" at some point.

In any case, the return of Bo-Katan is nothing but good news for Star Wars fans. If you're also a fan of Sackhoff from Another Life and Battlestar, it's time to grab your blaster and bring in the cat.

The Mandalorian Season 2 comes to Disney+ in October 2020.