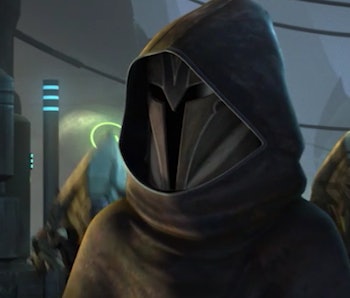 Although The Clone Wars Season 7 is a long-overdue finale of a series that was canceled in 2013, it's also a glimpse into the future of Star Wars on TV — and the latest episode is no exception. Just as Ahsoka's adventure with the Martez sisters gets dicey, The Clone Wars drops an unexpected cameo that clearly hints at the ex-Jedi's future in The Mandalorian Season 2.

Here's what that big cameo meant in the context of this Clone Wars episode, who one of those helmeted figures really was, and why it's a big deal going forward.

Toward the end of the newest episode as Ahsoka, Trace, and Rafa try to flee the Pyke-controlled planet Oba Diah, three hooded and helmeted Mandalorians watch from afar. The lead Mandalorian thinks she recognizes Ahsoka, saying, "It might the Jedi I met on Carlac."

This Mandalorian is none other than Bo-Katan Kryze, who met Ahsoka on the planet Carlac in the Clone Wars Season 4 episode "A Friend in Need." Bo-Katan is the sister of Duchess Satine, the former ruler of Mandalore, who, at this point in time, has been killed by Darth Maul. Bo-Katan is voiced by beloved Battlestar Galactica alum Katee Sackhoff, and the credits of this episode confirm it is indeed Sackhoff back in the role.

So who's the other Mandalorian standing beside her? The credits say this is "Ursa Wren," played by Sharmila Devar. This is likely Sabine Wren's mom, the Mandalorian Rebellion hero from Star Wars Rebels. But could Ursa Wren also be the Mandalorian character known as "the Armorer"?

In Season 1 of The Mandalorian, the matriarchal and mysterious "Armorer" seems to be in charge of Mando's clan, and makes the beskar armor for everyone in it. Could this character secretly be either Ursa Wren or Bo Katan? The Armorer seems to be older and wiser than Mando, which suggests she's been around in the fight for a while. This would easily allow her to be an older version of Ursa Wren or Bo Katan.

In Rebels, the last person we saw wielding the Darksaber was Bo Katan, who was hanging out with Ursa Wren at that point, too. To be clear, Rebels is in the future of this Clone Wars episode, but the big link to Mandalorian Season 2 is Ahsoka. It's all but official that Rosario Dawson will play Ahsoka alongside Mando and the gang in Season 2. This Clone Wars scene is likely setting some of that up.

Here's the dialogue between Bo Katan and Ursa Wren:

Ursa Wren: “Her presence could compromise our mission.”

Bo Katan: “Perhaps, but don’t forget, we have a common enemy. Let’s keep track of her. She could be of use to us.”

If either Bo Katan or Ursa Wren is secretly the Armorer in The Mandalorian, their alliance with Ahsoka will be a big deal in Season 2. If these two Mandalorians were the last to see the Darksaber before it was stolen by Moff Gideon, it makes sense to establish a link to Ahsoka this far back in the Star Wars timeline.

We don't know much about their mission, but because Clone Wars Season 7 will almost certainly conclude with the Seige of Mandalore, it seems we'll have more answers very soon.

The Clone Wars isn't a direct prequel to The Mandalorian, mostly because you've got Revenge of the Sith, Solo, all of Rebels, and the classic trilogy sandwiched in between. Yet because we're seeing very pivotal Mandalorians catch-up with Ahsoka, the stage could be set for some very big revelations.

Several people involved with Clone Wars Season 7 have said it will change the way we think about Star Wars. Even if that's not exactly true, it seems that the introductions of these Mandalorians certainly sets-up a future reveal for Din Djarin very soon.