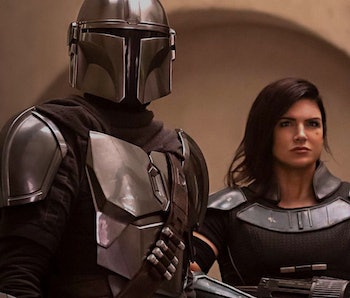 The Mandalorian Season 1 just ended, but we’re already looking forward to Season 2. Recent set photos suggest we could get more of that sweet Star Wars desert action when the Disney+ show returns, but one overlooked tweet from back in November could reveal a shocking cameo in Mandalorian Season 2 that connects directly to Season 1’s huge cliffhanger ending.

Warning! Spoilers ahead for The Mandalorian Season 1 and maybe Season 2 too.

The Season 1 finale revealed that Mandalorian big bad Imperial boss Moff Gideon somehow got his hands on the Darksaber, a legendary black lightsaber built by the first Mandalorian Jedi. How did Gideon get the darksaber? We’re not sure but we have a few ideas. However, it’s possible we missed a huge clue spilled by another Star Wars actor in November.

The last person to wield the darksaber in Star Wars canon was Bo-Katan Kryze in the animated series Star Wars Rebels and Clone Wars (voiced by Katee Sackhoff). So when Moff Gideon showed wielding that same saber in The Mandalorian, we guessed that he may have gotten it by killing Bo-Katan.

But a recent tweet from Sackhoff suggests that’s not the case:

In November, Sackhoff tweeted that she’d just done “the coolest thing ever,” noting that she couldn’t reveal anything about it at the moment, but that it was a “career high.” Now that could mean a number of things — Sackhoff is also famous for her roles on Battlestar Galactica and Robot Chicken — but the timing suggests she could be bringing her canonical cartoon character to live-action in The Mandalorian Season 2.

After all, if the Darksaber is back, why not bring back Bo-Katan too? And going into full make-up as your badass cartoon character definitely sounds like a “career high” to me.

Insiders have hinted that several established characters from the Skywalker saga’s feature films mythology will make appearances during the show’s sophomore season.

However, something else about Sackhoff’s tweet raises even more questions. It sounds like she only did on day of work on the set of The Mandalorian Season 2 (assuming that’s what she’s talking about), which means she probably won’t be a series regular. She could have a cameo, or it could be a brief flashback revealing how Moff Gideon got the Darksaber by killing Bo-Katan.

Either way, it seems there’s a pretty good chance that we could see a live-action version of Bo-Katan in The Mandalorian Season 2. And if that’s the case, who knows what other popular Star Wars characters may turn up on the Disney+ show when it comes back next year.

The Mandalorian Season 2 premieres in Fall 2020.