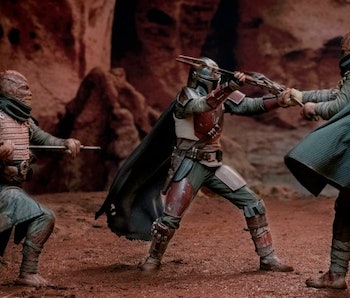 Production for The Mandalorian Season 2 is already well underway, and some of the very first set photos seem to imply that Mando and Baby Yoda might eventually make their way to the very familiar Star Wars planet of Tatooine. Or is it just another desert planet like so many others in that galaxy?

Bespin Bulletin, a social media account that reports on various leaks and photos from Star Wars movies and shows, posted the new photos to Instagram on Tuesday, and they show off what’s unmistakably some kind of desert planet with buildings made from a sand-colored stone (or maybe just sand) similar to the troglodyte structures of Tatooine built directly into rock but more refined.

The post notes that the Los Angeles-based set “is very Tatooine-esque” but also notes that we were all similarly fooled by the sand planet featured in The Mandalorian Season 2 that wound up being Arvala-7. They also note the presence of moisture vaporators and the resemblance to the Nikto mercenary compound where Mando first rescued Baby Yoda.

Even those buildings, however, look a little different.

There are plenty of desert planets in the Star Wars galaxy out there already established in canon, and they mostly all have this kind of architecture as well. For the production to build this set rather than visit the classic Tunisia sets used in the live-action Star Wars movies probably means this is just a quick visit to a random sandy planet rather than a longer amount of time spent somewhere more special, like Tatooine.

The architectural design, however, does bear a striking resemblance to the town of Mos Eisley on Tatooine.

In November, The Last Jedi director Rian Johnson told The Wrap that he visited the set of The Mandalorian Season 2 where he “spotted Baby Yoda in the corner,” which feels like confirmation that everyone’s favorite little green old baby survives into the second season of the show. If he and Mando are still on the run, then it’s possible that they might eventually make their way to Tatooine.

Most of The Mandalorian takes place in the Outer Rim territories, where Tatooine is also located, but this area of the galaxy also covers a huge swath of space. But hey, their ship is capable of hyperspace travel, so anything is possible. Mando did scoff in Episode 2 about going to the core worlds, so maybe that increases the chances of a Tatooine visit?

There’d be very little reason for anyone to go to Tatooine specifically at this point in the Star Wars timeline beyond a piece of fan service. There are a lot of scoundrels there and a decent-sized population, so it’s not a good place for wanted fugitives to try and lay low.

For what it’s worth, it would make more sense for Mando to visit the desert planet of Jakku, as the show takes place a few short years after the Empire’s final defeat on that planet. This is several years before Rey is born. What if the Mandalorian knows Rey’s filthy junk trader parents?

The Mandalorian is available to stream on Disney+.