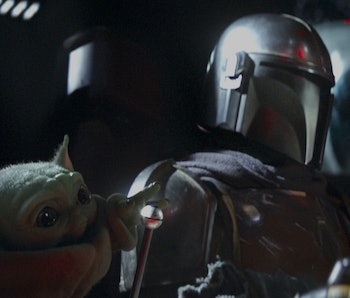 There’s got to be some sort of connection between The Mandalorian and Star Wars: The Rise of Skywalker, right? After all, you don’t just introduce a character like Baby Yoda if you don’t have longterm plans for it. So how do the two connect? I have a new theory and it has everything to do with whatever that creepy doctor was doing to Baby Yoda in Mandalorian Episode 3.

Spoilers below for The Mandalorian Episodes 1-3 and maybe Rise of Skywalker too.

We still don’t know exactly what Werner Herzog and his doctor friend wanted with Baby Yoda, but what if it has everything to do with keeping Emperor Palpatine alive? In that case, Mando rescuing the “Asset” could have inadvertently saved the entire galaxy

If our theory is correct, then Mando’s actions in Episode 3 will have lasting implications going into Star Wars: Episode IX. He may have even indirectly foiled Emperor Palpatine’s long-term plans by kidnapping the precious Baby Yoda.

We know for a fact that Werner Herzog’s “Client” character is some kind of officer in whatever’s left of the Empire four years after it surrendered to the New Republic. The timid scientist he’s working with, Dr. Pershing, has what looks like a modified Kamino cloner patch on his uniform that links him to the research facility from Attack of the Clones responsible for mass-producing the Imperial stormtrooper army.

When Mando surveils their hideout, he overhears the men have the following exchange, continuing their brief feud in Episode 1 about how necessary it is that the Asset survive:

The Client: I don’t care. I order you to extract the necessary material and be done with it.

Dr. Pershing: He has explicitly ordered us to bring it back alive.

The Client: Finish your business quickly, as I no longer can guarantee your safety.

This raises two obvious questions: What is the “material” being extracted and who ordered them to extract it? One exciting answer to both questions is that Palpatine survived his trip down the reactor shaft and is still pulling the strings. He wants Baby Yoda’s genetic material, rich in midi-chlorians, because it’s the key to naturally extending his life. To put it another way with a Harry Potter reference, this Baby Yoda juice is like unicorn blood and Palpatine (Voldemort) wants to drink it to preserve his dwindling life force.

There are hints in the final Rise of Skywalker trailer that Palpatine never died in Return of the Jedi at all and instead clings to life through unnatural means. This is, after all, the madman who transformed Anakin Skywalker’s charred, maimed body into Darth Vader using technology.

The Darth Vader: Dark Lord of the Sith comic series also details how the Emperor shut down the Kamino cloning facility and pivoted to conscripting young soldiers instead. Is it so outlandish to think that maybe the Emperor pivoted the scientific resources involved in cloning to instead figure out a way to artificially extend his own life through similar scientific means? If these scientists got their hands on genetic material rich in midi-chlorians, then they could have developed some kind of elixir to replenish a person’s life force with… the Force.

It would make sense for the Client and Dr. Pershing to receive the same assignment — perhaps directly from Palpatine himself — to acquire the genetic material from Baby Yoda.

Pershing understands how a living specimen has much greater value, but he also seems to genuinely care for Baby Yoda (“Please don’t hurt him! It’s just a baby!”) in the typical way that men of science do in stories like this. The Client is more pragmatic, willing to extract as much “material” even if it means Baby Yoda dies. They’re both pretty archetypal in that sense.

From a thematic standpoint, a big twist like this would be perfect, making Baby Yoda’s rescue in The Mandalorian Episode 3 hugely important. What if the Empire had made off with even more genetic material? Palpatine would have come back even sooner before Rey had a chance to grow up and channel the Force. It would make Mando and the rest of The Mandalorian’s cast that much more important without having to retcon any huge details from the new trilogy.

The penultimate episode of The Mandalorian Season 1 will be released the day before The Rise of Skywalker hits theaters, and then the season finale drops more than a week after that. Even the release schedule implies that there’s some kind of significant connection between this Disney+ series and Episode IX, and it might all hinge upon this crucial moment in Star Wars history when a bounty hunter forsook everything he stood for to save a 50-year-old, adorable green baby.

Watch The Mandalorian only on Disney+, and Star Wars: The Rise of Skywalker hits theaters on December 20, 2019.