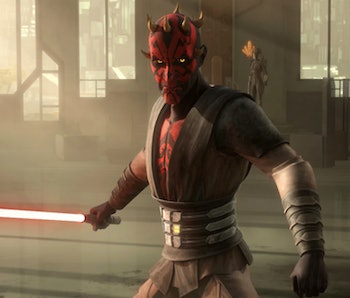 According to Clone Wars star Sam Witwer — the voice of Darth Maul — the last four episodes of Season 7 will change how fans think about the "core mythology" Star Wars. The actor added that this is also likely to be the last Star Wars story from the mind of George Lucas himself. Here's why that's such a big deal, and what it might mean for the franchise in the months and years ahead.

No spoilers for Clone Wars Season 7.

Clone Wars Season 7 is a Star Wars prequel in more ways than one. It ties together Attack of the Clones and Revenge of the Sith, and its story arcs predate Lucasfilm's purchase by Disney. This means what we're seeing is a slightly more "indie" version of Star Wars. This isn't to say Disney is automatically at odds with Lucas's vision. Despite what the trolls might say, Disney has not "ruined" Star Wars any more than Star Wars had already "ruined" itself in the past. (Sand, anyone?)

Clone Wars showrunner Dave Filoni is also a producer, writer, and director on The Mandalorian, a product 100-percent approved by Disney. In conversation with io9, Witwer says Filoni has brought a more cinematic flavor to the last four episodes of Clone Wars on the heels of his experience with The Mandalorian.

The immediate takeaway is that the Clone Wars finale will explicitly link to events in The Mandalorian. We know the Mandalorians in Clone Wars don't seem to know (or care) about the mysterious honor code known as "the Way." The upcoming four-episode finale of Clone Wars Season 7 will likely sort some of this out, while setting up Ahsoka Tano's return in Mandalorian Season 2.

Presumably, Witwer is talking about Maul and Ahsoka here. Trailers suggest the two will go head-to-head at some point in Season 7. But there's probably more to this comment, and it seems like whatever will change in the Clone Wars finale could change how we feel about other characters.

Who could he be talking about? We could start guessing, but that list could quickly include everyone from Baby Yoda (who is very much alive and even tinier during the Clone Wars) to Palpatine and even Obi-Wan.

The most interesting aspect of this is how all the story threads will tie together. Clone Wars is the last Star Wars project George Lucas worked on directly. Since 2015, Lucas has not been shy about taking pot-shots at the sequel trilogy and has spoken candidly about how the newer Star Wars stories departed from his vision.

The Clone Wars is an artifact of very recent Star Wars history. It may be beloved by diehards now, but ten years ago that certainly wasn't the case. The only Star Wars movie with a Rotten Tomatoes score worse than The Rise of Skywalker (52 percent) is the 2008 Clone Wars movie (18 percent), which launched the show. In fairness, the series itself has a much higher rating both on Rotten Tomatoes and in real life, but the point still stands. Lucas's vision for Clone Wars hasn't always been popular, because after the prequels much of the fandom was anti-George Lucas.

After the release of Rise of Skywalker, we're in something of a Lucas renaissance. Witwer's comments that The Clone Wars season 7 will end George Lucas' Star Wars scan as comfort food, and they should. Even fans who love every single Star Wars movie would be hard-pressed to prove that The Rise of Skywalker is more logical than any of George Lucas's Star Wars prequels.

Sure, the prequels might be less polished and poorly paced. Still, they are consistent with themselves, and all the various Star Wars projects from that era — including The Clone Wars — have a similar flavor. Some fans might say The Clone Wars saved the prequels, but the other way to look at this is The Clone Wars simply made the prequels better. Lucas has some wacky ideas about how the Force works (check out the Mortis trilogy in Clone Wars Season 3 if you don't believe me) but his unique brand of wackiness is fairly consistent.

Right now, the voice of Darth Maul is telling us that The Clone Wars could change everything about how we feel about Star Wars. But, the real promise is just the opposite. Even if certain things are retconned or details filled in, the feeling of The Clone Wars probably won't end up being a radical new Star Wars. Instead, as this season as proven so far, the value for fans is a return to the familiar. This isn't the same as fan service or nostalgia, though. If Lucas proved one thing with the prequels and The Clone Wars is that you can make something familiar without making it the same.

The Clone Wars airs new episodes on Fridays on Disney+. The four-part finale will begin on April 17, 2020.