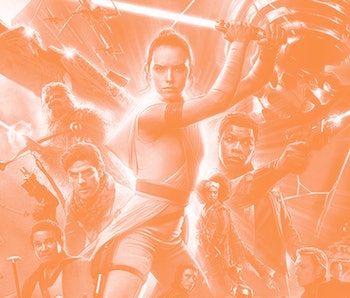 Even if Star Wars: The Rise of Skywalker didn't quite cap off a 40-year saga like fans hoped it would, it's still a sore spot that the movie isn't yet streaming on Disney+. Especially now, when most of the world has nothing better to do.

With that in mind, the day it would make the most sense for The Rise of Skywalker to start streaming on Disney+ is approaching at light speed.

May 4 is the fan-made "Star Wars Day," which has been embraced by Lucasfilm and Disney as an official day for varying Star Wars celebrations. ("May the Fourth Be With You.") Past years have featured deep discounts on Star Wars merchandise and minor league baseball teams dressing for the occasion. In 2015, astronauts aboard the International Space Station had the all-time best marathon binge-watching the movies IN SPACE.

But this year is different. As the Covid-19 pandemic forces people indoors, public celebrations, especially ones at the recently-opened Star Wars: Galaxy's Edge in the Disney parks, are out of the question for fans wanting to revel in all things a galaxy far, far away. So what can Star Wars fans do but binge more Star Wars on Disney+?

Already scheduled for release on May 4, 2020 on Disney+ is the finale to Star Wars: The Clone Wars and Disney Gallery: The Mandalorian, an eight-part documentary series revealing the making of the first-ever live-action Star Wars TV series. But what if Lucasfilm has one more thing up its sleeve?

In a press release announcing the Mandalorian documentary, Disney even acknowledged the importance of May 4, stating: "What started as a fan-generated grassroots holiday, Star WarsDay has become a full-fledged celebration of theStar Wars saga embraced by the entire galaxy."

With fans forced to stay home, Disney has an opportunity to keep up interest in its streaming service by finally streaming Star Wars: The Rise of Skywalker. It's already keen on bringing some high-profile movies straight to the service; Artemis Fowl, a feature film adaptation of the 2001 fantasy crime novel, was originally slated to hit theaters until Disney pivoted to a Disney+ premiere in the wake of the coronavirus.

That still doesn't mean you can expect Mulan or Black Widow to hit Disney+ just yet. But if a movie like Artemis Fowl can hit Disney+, could a movie the studio already released like The Rise of Skywalker arrive a bit ahead of schedule.

As of now there really is nothing to go on regarding a Disney+ stream date for The Rise of Skywalker. Based on previous movies like The Last Jedi, June seems likely, but that's just our own speculation.

The film is still (probably) making money at $20 a pop on digital. ($25 if you spring for the Ultra HD option.) It will become available to stream as soon as Disney stops seeing money from direct digital sales. And with the pandemic, the company has seen a loss of $30 million a day, so you can bet it'll cling to a $20 movie as long as it can.

The Rise of Skywalker could begin streaming on Disney+ tomorrow, or six months from now. What we do know is that it can't be that far away, and Star Wars feels like as good a time as any to make fans happy.

Star Wars: The Rise of Skywalker is now available on DVD, Blu-ray, and VOD.