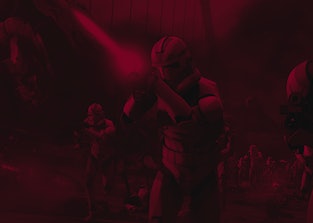 For Star Wars fans who have been waiting for The Clone Wars Season 7 to start feeling like an animated Star Wars movie, we have some good news: Episode 9, "Old Friends Not Forgotten," delivers the Star Wars goods in a huge way.

Unlike previous episodes, "Old Friends Not Forgotten" takes a decidedly cinematic approach to The Clone Wars. It switches the font color to Sith-red, and even labels itself as "Part 1." We know this is Part 1 of 4, meaning, taken together this roughly two hours of Clone Wars action will be the final word on this section of Star Wars history.

Inherently, this makes it the most exciting, dynamic, and surprising set of Clone Wars episodes in a long time. But because The Clone Wars are actually coming to an end, we're finally so close to the events of Revenge of the Sith that some of the wonkiness of that film's plot are being subtly smoothed out by The Clone Wars.

Here are four questions you might still have about Revenge of the Sith that The Clone Wars Season 7 has suddenly answered.

Spoilers ahead for The Clone Wars Season 7 Episode 9, "Old Friends Not Forgotten."

4. Why Obi-Wan and Anakin were late to the Coruscant battle — Famously, Revenge of the Sith begins with Anakin and Obi-Wan flying their Jedi starfighters right into an already in-progress battle taking place over Coruscant. In Revenge of the Sith, we're told during the opening crawl that General Grievous has basically just rolled up on the capital of the galaxy and started going HAM. As the movie opens, Palpatine has already been "captured" by Count Dooku and General Grievous, which again, is something that we only get from the text crawl. Now we have a better sense of where Anakin and Obi-Wan were right before all of this happened, and why they seem to be rushing into an already in-progress battle.

The majority of the episode revolves around Ahsoka and Bo-Katan trying to convince the Republic to help out with a joint siege on Mandalore to remove the puppet government Darth Maul is running there. Just when you think Obi-Wan, Anakin and Ahsoka will all team-up to do this, history intervenes. Anakin and Obi-Wan have to go to Coruscant because — wow — we've actually caught up with this point in the Star Wars timeline.

Anakin and Obi-Wan are racing into a battle on Coruscant because they'd been called away before the events of the episode. Which leads us too...

3. Why Jedi were so vulnerable and spread-out during Order 66

At the end of Revenge of the Sith, one memorable montage shows several Jedi being killed by their now-treacherous Clone battalions. But why were so many Jedi totally alone, out on distant worlds, with only Clone Troopers hanging out with them? The opening narration of the first part of The Clone Wars finale makes that somewhat clear.

"Outer Rim! Under Siege!" the narrator declares. He then says, "Republic forces are pushed to the brink.. the Jedi council has dispatched its generals, sending them far from the Core Worlds to bolster the beleaguered Clones."

During this opening montage, we see several familiar Jedi, including Aayla Secura and Plo Koon, leading their Clones into battle. Obviously, in a few weeks (days?) these Clones will turn on them.

This also helps to explain why there aren't as many Jedi on Coruscant in Revenge of the Sith; most of them had literally been ordered to the Outer Rim, including Obi-Wan and Anakin.

2. Anakin's motivations in Revenge of the Sith sense, sort of — In a pretty heart-wrenching scene, Bo-Katan reminds Obi-Wan Kenobi that her sister — the Duchess Satine — was murdered by Darth Maul on Mandalore. This happened in Clone Wars season 5, and at that point, Statine was Obi-Wan's low-key girlfriend, even though, we all know, Jedi aren't supposed to have romances.

When confronted with the idea that he should help Mandalore because of his personal attachments, Obi-Wan reacts coldly and tells Bo-Katana that he won't let his personal feelings get in the way of his decisions. This echoes Obi-Wan's admonishment of Anakin in Attack of the Clones, but in this context, it's an interesting lesson considering what's about to happen to Anakin. (He's gonna find out his wife is pregnant and then have a Force vision that she's going to die.)

Obi-Wan's one true love straight-up died because he couldn't protect her, and his later stoicism about it clearly bothers Anakin, specifically in this new episode. In Revenge of the Sith — which will probably be happening concurrently with the next three Clone Wars episodes, Anakin will make the opposite decision to what Obi-Wan does here. He will let his personal feelings influence everything, and in a sense, that's in response to what he perceives as Obi-Wan's failure.

1. Where's Captain Rex? — In the larger Star Wars canon, the story of Captain Rex contains some holes. For one thing, we never saw him in Attack of the Clones or Revenge of the Sith, even though he's the most famous — and important —Clone in The Clone Wars.

In Rebels, we eventually meet an older Rex who, along with two other Clones, managed to avoid being brainwashed by Order 66. But it's never been clear why Rex wasn't in Revenge of the Sith. Now we know, thanks to Anakin's loyalty to Ahsoka, the 501st Clone Division is split-up, and Rex heads off to Mandalore with Ahsoka as his unofficial "advisor." This is why we never saw Rex in Revenge of the Sith; he was too busy dealing with all sorts of stuff on Mandalore.

The most interesting aspect of this storyline will almost certainly be a specific place where The Clone Wars end. How will Rex react when all of his Clone brothers betray the Jedi? We're about to find out.