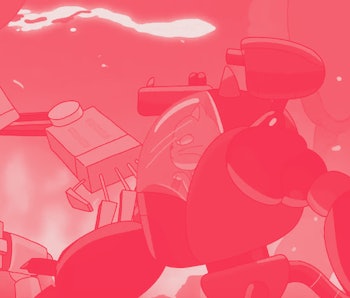 Rick and Morty dropped a neutrino bomb on fans with the release of its epic Season 4 Part 2 trailer. Titled, "The Other Five," this glorious teaser confirms the return of multiple iconic villains, from Evil Morty to Snuffles the super-intelligent dog. However, there's one familiar antagonist that Rick and Morty fans might have missed, and it could reveal how a previous Season 4 episode set up an epic season finale showdown.

One scene from the new Rick and Morty Season 4 trailer shows Snuffles (or Snowball, as he prefers to be called) in his old mech-suit fighting a cat in a mech suit of its own. That's a pretty epic battle (and it might just be part of an even bigger conflict including some other fan-favorite baddies), but it could be even more important than you think.

Remember back in Rick and Morty Season 4's Dungeons & Dragons-themed episode when Jerry and a talking cat went on an adventure to Florida? No? To be fair, it was a pretty minor B plot that didn't amount to much. At least, that's what we thought at the time.

Each time someone asked why the cat could talk it replied, "stop asking questions." This cat was all about having fun, not explaining why it could talk. Later in the episode, Rick and Jerry both find out the cat's backstory, but it's so horrible they can't repeat it. So clearly this cat is evil, but we don't know why.

Now, we may have the answer. To be clear, we're not saying this infamous talking cat is the same one wearing the mech suit in the new Rick and Morty Season 4 trailer. They're clearly different colors with different fur patterns. But it seems likely these two abnormal cats are connected, and if the talking cat was involved in some sort of mech war that could explain the horrific thing Rick and Jerry saw earlier this season.

The other question, of course, is which episode the mecha-cat clip comes from. There's five episodes left of Rick and Morty Season 4, and it's tempting to think the big showdown teased in the new trailer will arrive with Episode 6 on May 3. However, one clue from Rick could confirm this epic episode won't arrive until the very end of Season 4.

In the earlier episode, when Rick finds out about Jerry's cat issues he makes a typical fourth-wall-breaking joke. "I better check on him," he says. "Big season finale right there, you know?”

Was Rick setting up the actual Season 4 finale? We have a feeling that was the plan all along.

Perhaps more importantly, will our friend the talking cat show up? And will he bring his friend the dragon? We'll just have to wait and find out. Thankfully, that wait is almost over.

Rick and Morty Season 4 will begin May 3 on Adult Swim.