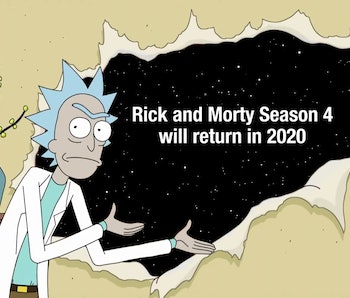 Rick and Morty Season 4 remains on hiatus until Episode 6 airs sometime later this year, but a Pringles Super Bowl ad this weekend seems like the perfect time to announce the mid-season premiere. Could it actually happen?

Since the mid-season finale in December, there's been no word about when the second half of Rick and Morty Season 4 will begin airing, other than an announcement from Adult Swim that it'll happen in 2020. Technically, we could still have to wait more than 10 months, but it feels totally possible that Adult Swim might announce the midseason premiere date during the Super Bowl this Sunday.

The timing couldn't be more perfect, and characters from the show will already be in attendance via a Pringles commercial.

Adult Swim released a Pringles commercial on Tuesday featuring Rick, Summer, and some Flavor Stack-obsessed Mortybots. The 30-second ad is slated to air during the second quarter of Super Bowl LIV on Sunday, the same day that a Pickle Rick-flavored can of Pringles becomes available nationwide in stores. Last week, Adult Swim also released a 6-second teaser for the Pringles collaboration in which a fleet of Mortybots practices their Flavor-Stacking skills.

Will both of these clips air during the game? Is it possible that a different, extended version will air, or even a third clip more tailored to the show that might formally announce when the next episode is slated to air? Releasing an entire commercial before it airs during the Super Bowl seems a bit counterintuitive, even though it's seemingly become the norm.

Also Read: Every Single Rick and Morty Episode, Ranked and Reviewed (In Progress)

We can't possibly know for sure what Sunday night might entail for Rick and Morty, but there won't be a better opportunity in terms of exposure and hype for the series.

Adult Swim often licenses out the characters for stunt promotions like this. The title characters were featured in a November ad for Death Stranding, a Fallout 76 livestream with Ninja a year before that, and even an Emmy Awards presentation in September 2018. These stunts never really impact the show in any way, and they don't have any bearing on the schedule of the main series, but when you think about some of the unpredictable stunts that Adult Swim has pulled in the past, you can't help but get a little hopeful something wild might happen during Sunday's game.

All of this may be little more than a pipe dream, but Rick and Morty has programmed our brains to expect the unexpected, especially in terms of the unprecedented ways that it breaks the Fourth Wall and puts the show's characters within ads or in other strange circumstances.

Season 3 premiered as part of an April Fools' Day stunt in 2017, so is it crazy to think Adult Swim might collaborate with Pringles to announce the Season 4, Episode 6 air date? Heck, Episode 6 surprise-airing at 11:30 p.m. on Adult Swim after the Super Bowl even feels possible given the show's history; Sunday night at 11:30 is when the show usually airs anyway.

Given what we know about the production schedule, namely that the voice actors finished recording lines months ago, it does seem possible that Episode 6 might air relatively soon.

Rick breaking out of the Pringles ad for an adventure in the world of Rick and Morty sounds like a totally bonkers and exciting way to pick things up for Season 4, and the mere prospect might even get Rick and Morty fans who don't care about football to watch the Super Bowl just in case. At the very least, we might as well hope for an announcement about the Episode 6 air date very soon even if it's not Sunday night.

Even if the date isn't announced during the Super Bowl, Rick and Morty Season 4 will continue sometime later in 2020.