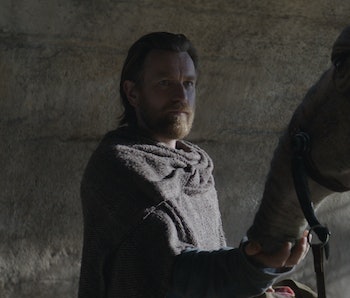 Obi-Wan Kenobi takes place during a dangerous time for its titular Jedi (played by Ewan McGregor).

The highly anticipated Disney+ series, which premieres in just a few short months, takes place after Star Wars: Episode III — Revenge of the Sith but before the beginning of Star Wars: Episode IV — A New Hope. That means Kenobi will pick up with McGregor’s Obi-Wan when he is still living in exile on Tatooine and watching over a young Luke Skywalker from afar.

The series’ first trailer is full of Easter eggs and clues related to its specific setting, but for casual Star Wars fans who aren’t as well-versed in the franchise’s lore, those details might be more confusing than illuminating. With that in mind, here’s everything both die-hard and casual Star Wars fans alike should know about Obi-Wan Kenobi’s setting heading into the show’s May premiere.

When does Obi-Wan Kenobi take place?

According to Lucasfilm and Disney+, Obi-Wan Kenobi will begin 10 years after the events of Revenge of the Sith. That means Luke Skywalker will be either 9 or 10 years old when the series begins, which makes sense based on what little we see of the character in the first Kenobi trailer.

The show’s setting also means the events of its story will unfold around nine years before the Battle of Yavin in A New Hope, which saw Luke successfully destroy the Death Star and the war between the Empire and the Rebellion finally take a turn for the better. Obi-Wan, meanwhile, will be around 48 years old when the new Disney+ series begins — just nine years away from his death in A New Hope.

Additionally, the Grand Inquisitor (Rupert Friend), whose presence looms large in the first Kenobi trailer, will likely still be alive and well by the time the new Disney+ series comes to an end. The character, who perishes in the first season of Star Wars Rebels, doesn’t canonically die until four years before the Battle of Yavin.

For video game fans, Obi-Wan’s setting also means that it takes place around four years after the ending of Star Wars Jedi: Fallen Order. That game notably deals with many of the same settings and concepts expected to play important roles in Obi-Wan Kenobi. Whether the upcoming Disney+ series references any of the events of Fallen Order, however, remains to be seen.

The Inverse Analysis — Obi-Wan Kenobi promises to shed some light on a period that happens to be one of the most interesting times in Star Wars history. If rumors are to be believed, the series will also reveal new details about Darth Vader (Hayden Christensen) and Obi-Wan’s history together prior to their duel in A New Hope.

By taking place when it does, Kenobi has the chance to establish further just how much danger the surviving Jedi faced a decade after Revenge of the Sith and how McGregor’s Obi-Wan managed to live through it all.