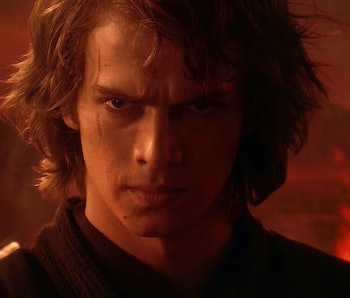 In November 2021 it was teased that Obi-Wan Kenobi would feature a new fight between the show’s exiled hero (Ewan McGregor) and his former student, Anakin Skywalker (Hayden Christensen). While it had already been announced that Christensen’s Darth Vader would appear in the Disney+ series, the announcement that he might actually cross lightsabers with McGregor’s Obi-Wan came as a surprising development to many Star Wars fans.

Now, coming off the recent release of the first Obi-Wan Kenobi trailer, a new rumor claims to have some specific details about Anakin and Obi-Wan’s confrontation.

The Rumor — MakingStarWars.net recently reported that Obi-Wan and Anakin will face off not just once in Kenobi, but twice. The outlet claims that their first fight doesn’t go well for McGregor’s Obi-Wan, but that his defeat at the hands of Anakin only makes him that much more determined to put a stop to his former friend.

MakingStarWars then claims that the duo’s second fight will take place on a “rocky moon” of Mustafar, and will see McGregor’s Obi-Wan receive some unexpected “words of encouragement” from none other than Qui-Gon Jinn (Liam Neeson). After repeatedly failing to make contact with Qui-Gon in the show’s first few episodes, the scene will apparently mark the first time that Obi-Wan successfully speaks to the spirit of his old master.

According to MakingStarWars, the series will show Obi-Wan return to his secluded cave on Tatooine after his second fight with Vader, where he’ll finally see Qui-Gon’s force ghost.

Hope Survives — Reports like this should always be taken with a grain of salt, as there’s no way of knowing how accurate they are until the shows are finally released. That said, this Obi-Wan rumor does line up well with what we know about the Disney+ series, as well as with what several previous reports have claimed.

Specifically, it was recently reported that Liam Neeson would appear again as Qui-Gon Jinn in Obi-Wan Kenobi. Therefore, while Lucasfilm has yet to even hint that Neeson could reprise his Phantom Menace role in the series, there’s reason to believe there may be some substance to this rumor.

Additionally, the claim that Obi-Wan encounters both Qui-Gon and Anakin makes sense based on what we know about the character’s arc in the Disney+ show. Ewan McGregor himself has said that Obi-Wan will be “broken” and “faithless” when Kenobi begins, and it’s possible he could be that way not only because he blames himself for Anakin’s fall to the Dark Side, but also because he hasn’t been able to contact Qui-Gon.

The Inverse Analysis — Having Obi-Wan fail to both defeat Anakin and contact Qui-Gon would make it clear to viewers just how badly he’s struggling when Kenobi catches up with him. Defeating Darth Vader in a rematch and successfully making contact with Qui-Gon would then be a satisfying way to wrap up his story.

There’s no denying these narrative beats could work well in Obi-Wan Kenobi. All Star Wars fans have to do is wait and see whether they actually happen when the Disney+ series premieres in May.