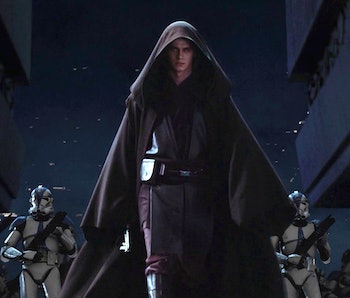 Ben Kenobi is one of the last Jedi in the galaxy, at least by the time he starts using the name Ben instead of Obi-Wan. But what the new series Obi-Wan Kenobi presupposes is, maybe he’s not? One rumor suggests that a new Jedi will pursue Obi-Wan while he’s hiding on Tatooine and, if that happens, a big flashback could change everything we know about Order 66. Here’s how the Sith dominos could theoretically fall.

According to trusted leaker Making Star Wars, part of the plot of Obi-Wan Kenobi will focus on a “Jedi straggler” named Nari who comes to Obi-Wan for help. Like Baby Yoda, it seems this person grew up in the Jedi Temple and somehow survived Order 66. Making Star Wars suggests this will lead to some kind of flashback scene in which we’ll see a digitally de-aged Hayden Christensen.

So if a de-aged Anakin shows up to help execute Order 66, then things are going to get interesting.

This is a bit of leap, but if a young person survived Order 66, and then a decade later is a teenager searching for Obi-Wan Kenobi, then it stands to reason they were a child during Order 66. In Revenge of the Sith, we infamously see Anakin enter a room full of younglings, and after they ask him for help he ignites his lightsaber. We don’t see what happens next, but the implication is that Anakin killed them. Later in that film, Obi-Wan tells Padmé that he’s seen footage of “Anakin killing younglings.”

But what if Anakin let some of those kids go? Or, more to the point, what if he let one kid go, and that kid is this new character who finds Obi-Wan Kenobi in Obi-Wan’s series?

If that’s the case, then everything about the series could turn Darth Vader canon on its helmet.

Ever since it was announced that Anakin Skywalker would appear in Obi-Wan Kenobi — and that Vader and Kenobi would meet again — fans have fixated on a moment from Return of the Jedi where Vader tells Luke “Obi-Wan once thought as you do,” implying that Obi-Wan had actively tried to turn Vader back to the light.

Almost nothing in the prequels corroborates this. When Obi-Wan comes to Mustafar in Revenge of the Sith he’s there to kill Anakin. He doesn’t try to appeal to Anakin’s good side. At that point, Obi-Wan has no evidence that there’s any hope for Anakin. When Padmé says there’s still good in Anakin, Obi-Wan dismisses her.

But, if Anakin spared a child during Order 66, then suddenly that would give anyone, including Obi-Wan, some hope. In fact, this could even mean that Anakin was responsible for Grogu surviving.

We have no idea if this Order 66 flashback will really happen, but if it does there are two questions to consider. First, why do a flashback unless you’re going to change something about a moment we’ve already seen? And second, what really happened to all those younglings?

Obi-Wan Kenobi hits Disney+ on May 25.