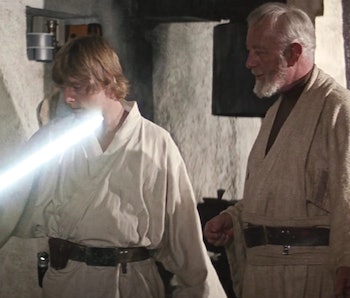 Ben Kenobi has a lightsaber. In the first teaser poster for the upcoming Disney+ series Obi-Wan Kenobi, we see Old Ben clutching the familiar hilt of an elegant weapon from a more civilized age. And yet, there’s some debate over which saber he’s holding. Is that his regular one or is that Anakin’s lightsaber?

Depending on the answer, everything we know about Darth Vader’s story might change, and one very old Star Wars plot hole might finally get fixed. Wild speculation ahead.

Which lightsaber does Obi-Wan have?

According to the latest press release from Disney and Lucasfilm, “The story begins 10 years after the dramatic events of Star Wars: Revenge of the Sith.” This means Obi-Wan Kenobi happens roughly nine years before A New Hope, a movie in which we 100 percent saw Ben give Anakin’s lightsaber to Luke Skywalker. However, in Revenge of the Sith, we see Obi-Wan snatch Anakin’s classic lightsaber from the ground on Mustafar. Presumably, he held onto that lightsaber and his own for the next 19 years until the events of A New Hope.

For the most part, we’ve always assumed that Obi-Wan kept Anakin’s saber in his little locked chest and only carried around his own. But the new Obi-Wan Kenobi poster has some fans on Reddit wondering about that because the image kind of looks like he’s holding Anakin’s lightsaber.

As one Redditor put it, the “slanted emitter and possibly the bunny ears in that silhouette” indicate we’re seeing Anakin’s saber, not Obi-Wan’s. To be fair, the image on the poster isn’t entirely clear, but it’s vague enough to make you wonder. For reference, the image below shows what Obi-Wan and Anakin’s sabers look like.

So, let’s say Obi-Wan is carrying Anakin’s saber in this poster, and that alone is intentional and suggestive of several other storylines that might take place in the new series. That is a lot of ifs, but if Obi-Wan does decide to go somewhere else in the Disney+ series, we could be looking at a sequence of events that would finally explain one of Old Ben’s weirder lines.

In A New Hope, Obi-Wan tells Luke, “Your father wanted you to have this when you were old enough.” Nothing that happens in Revenge of the Sith indicates Anakin, aka Darth Vader, said anything like this at all. In fact, up until now, we’ve had to assume Anakin believed Padmé died away before giving birth, and perhaps the Emperor thought this, too.

But what if Obi-Wan Kenobi will change all of that? Conventional wisdom has made us think Vader learns about Luke after the Death Star is destroyed, and the only reason he realizes this is because of Luke’s last name. The special edition of Empire Strikes Back even altered Palpatine and Vader’s dialogue slightly to make it seem like Vader had just learned this recently, and the destruction of the Death Star was the flashpoint at which Vader became obsessed with finding his son.

However, if Obi-Wan Kenobi meets Darth Vader IRL within the context of the new show and brings along Anakin’s saber, we could theorize that Kenobi makes one last attempt to convert Vader back to the good side of the Force. This idea would account for Vader’s line in Return of the Jedi, when he said, “Obi-Wan once thought as you do,” while talking to Luke about maybe turning good again.

On top of that, if Obi-Wan presents Anakin’s old saber to Vader, it’s possible — however unlikely — that Obi-Wan could accidentally reveal to Vader that Luke exists. In a roundabout way, perhaps in a moment of weakness or indecision, Anakin could say to Obi-Wan, “Well, screw you for hiding my kid from me, but you better give him that lightsaber when he’s old enough.”

Then again, the Star Wars saga has a fairly bad track record at explaining everything when it comes to the specific journeys of various lightsabers. But if Obi-Wan is carrying around Anakin’s old saber, it won’t just be for fun.