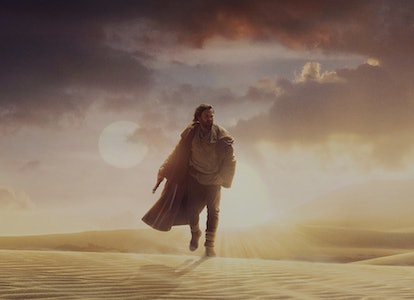 Darth Vader! The Grand Inquisitor! Han Solo?! Obi-Wan Kenobi is chock full of Star Wars characters fans have been hoping to see for years, but could there be another fan-favorite hiding in plain sight? A closer look at the Kenobi trailer may reveal an Easter egg that will blow the minds of anyone who loves Clones Wars or Star Wars Rebels.

On Reddit, one Star Wars fan noticed something interesting in the Kenobi teaser trailer: an image of someone wearing the same armor used by the prequel-era clone soldiers.

This screenshot doesn’t reveal much, but we’re clearly looking at clone trooper armor. You can recognize the coloring around the hands, along with the unique design where the torso armor meets the legs. The stormtrooper getups don’t have nearly as much style.

Here’s the image from the Kenobi trailer:

And here’s a picture of the clone troopers from Clone Wars.

Who could this be? There are a few possible explanations. It could be Obi-Wan (or someone else) in disguise. It could also be some random clone soldier, though Palpatine phased them out pretty quickly after he defeated the Jedi.

However, there are also a small handful of clones who managed to defy Order 66 and escape the Empire’s clutches, and one, in particular, comes to mind.

Is Rex in Obi-Wan Kenobi?

Commander Rex is arguably the most famous Star Wars clone (not counting Boba Fett). After serving as a commander during the Clone Wars, he disabled his Order 66 chip with some help from Ahsoka Tano. Later, Rex and a few other clone survivors hid out on a remote desert planet called Seelos, as seen in Rebels.

Notably, Rebels takes place 14 years after Revenge of the Sith, while Kenobi is set just a decade after that movie. Rex’s activities during this time are mostly unknown, meaning he could technically show up on the new show to help out Obi-Wan and stick it to the Empire.

Among a certain type of Star Wars fan, Rex is also particularly beloved. He was a pivotal character in the Clone Wars cartoon — arguably on the level of Anakin or Ahsoka — but we’ve never seen him in live-action (unless you subscribe to certain controversial fan theories about Return of the Jedi).

Perhaps most important, actor Temuera Morrison (Jango Fett in the prequels and Boba Fett in Book of Boba Fett) happens to be the perfect age to play the salt-and-pepper bearded Rex. All the pieces are in place. Hopefully, Lucasfilm figured it out in time to put Rex in its latest show.