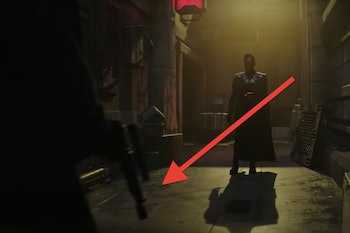 If you thought you couldn’t get any more excited for Obi-Wan Kenobi, well, think again. Disney released the first teaser trailer for the Ewan McGregor miniseries on March 9, and it’s full of epic moments, from the first look at a young Luke Skywalker to thrilling shots of the terrifying, Jedi-killing Inquisitors, to General Kenobi himself. But there’s one blink-and-you-miss-it detail that blows everything else away.

Warning! Possible spoilers for Kenobi below.

Near the end of the Obi-Wan trailer, we see Inquisitor Reva (a brand new villain) facing against a figure cloaked in the shadows of a dark alley. One detail of this mysterious character is clear, however. We can easily make out the outline of a blaster in his right hand, and it looks awfully familiar.

If you still haven’t guessed it, here’s a clue:

That’s right; we’re fairly certain that none other than Han Solo is hiding in the shadows of this Obi-Wan Kenobi trailer. Whether we’ll be seeing a digital de-aged Harrison Ford or Alden Ehrenreich in the flesh remains to be seen, but I’d be shocked if Han doesn’t make some sort of appearance.

Not convinced? The evidence goes beyond this single shadowy image. Let’s dig a little deeper.

Is Han Solo in Obi-Wan Kenobi?

The most important question we need to answer here is a simple one: Could Han Solo technically show up in Kenobi? A bit of research reveals that the answer is yes.

Let’s take a look at the Star Wars timeline. First, remember that history in this galaxy is measured as Before and After the Battle of Yavin (BBY and ABY), essentially making A New Hope take place in year 0 of this franchise. Solo takes place sometimes between 13 and 10 BBY. Meanwhile, we know that Kenobi is set 10 years after Revenge of the Sith (which took place in 19 BBY), making this new show set in the year 9 BBY. In other words, Kenobi takes place almost immediately after Solo in the Star Wars timeline.

Do you see where we’re going with this? Not only does the timeline work, but it actually strengthens the argument for a Han Solo cameo. If we’re ever going to find out what happened to Han after Solo, then Kenobi is our chance to do it. And if we’re lucky, maybe he’ll even bring along a few friends.

Obi-Wan Kenobi premieres May 25 on Disney+.