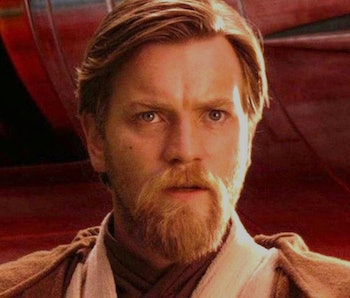 The Force feels strong this morning. As if calling out from across the universe, the official (?) Twitter account for Obi-Wan Kenobi tweeted the two best words in the English language: “Hello there.” But does this mean the trailer for the Disney+ limited Star Wars series is about to be released? Here’s what you need to know.

Star Wars fans noticed the existence of a new Twitter account @obiwankenobi a while ago, and while the account is still unverified, it certainly looks like the official page for the Ewan McGregor show. After all, how else would anyone manage to secure that exact username?

So when General Kenobi finally tweeted for the first time on March 9, fans took notice:

It’s not exactly a confirmation that the Obi-Wan Kenobi trailer is coming, but for Star Wars fans, those two words speak volumes. Famously uttered by McGregor Kenobi during the prequels, they immediately evoke the character and his debonair attitude in the face of danger. We have to assume he’ll find a reason to reuse his iconic catchphrase on Disney+.

But why does this tweet mean the first trailer for Obi-Wan Kenobi is coming? Let’s dive deeper.

When is the Obi-Wan Kenobi trailer coming out?

Speculation has already been high that the trailer’s release is right around the corner, but according to MakingStarWars.net, one of the most reputable sources for Star Wars leaks, it’s actually “imminent.” In a recent blog post published at roughly 6 p.m. Eastern on March 8, the site claimed a trailer would arrive within 24 hours. Combined with the hint from Twitter, it certainly seems like something is coming soon.

Finally, it’s also worth noting that Disney is hosting a shareholders’ event today at 1 p.m. Eastern. The company often reveals new trailers and footage at these events, so it seems the Kenobi trailer could appear online soon afterward.

Oh, and Entertainment Weekly just revealed a big Obi-Wan Kenobi feature with new images and interviews from the show. In other words, it’s all pointing to something exciting very soon. (Then again, maybe the big thing is the magazine article? We’ll just have to wait and found out.)

Obi-Wan Kenobi premieres May 25 on Disney+.