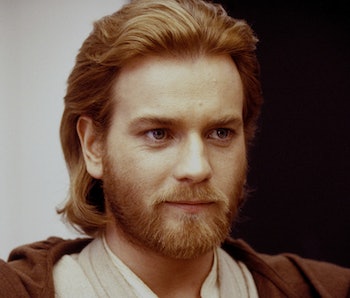 Among other reveals, the magazine has shown off the series’ new villain: A force-sensitive agent of the Empire. Obi-Wan may be retired, but that doesn’t mean his Jedi duties are over.

What Happened? — The new Star Wars series, which hits Disney+ on May 25, features Ewan returning as Obi-Wan, the first time McGregor’s been involved with the franchise since 2005’s Revenge of the Sith. Among the photos, which primarily involve McGregor looking a bit older and leather-y as a desert-dwelling Obi-Wan watching over a young Luke Skywalker, there are also three photos of the new villain, Inquisitor Reva, played by Moses Ingram (The Queen’s Gambit).

All the photos can be seen at Entertainment Weekly here.

Expecting the Inquisition — Entertainment Weekly describes Inquisitor Reva as “ruthlessly ambitious” and “a formidable new foe” who “seeks out Jedi-in-hiding for the Empire.” Little else is known about her, though Ingram told the magazine that she and Darth Vader “share a common dark-side goal.” “They’re on the same team,” she says.

Another photo teases a confrontation between Reva and Uncle Owen, with Joel Edgerton returning to reprising his minor role from Attack of the Clones and Revenge of the Sith. After Star Wars, Edgerton has gone on to find greater success in movies like It Comes At Night (2017) and The Green Knight (2021).

While fans have long assumed that Uncle Owen lived a quiet life raising Luke on his farm, Obi-Wan Kenobi may reveal an untold chapter where Owen stood up to the Empire.

Darth Reva? — There isn’t much we know about Inquisitor Reva yet, but the fact that she’s force-sensitive and working for the Empire is telling of her character. As explained in the extended canon, Inquisitors are Darth Vader’s elite Jedi slayers. They’re all fallen Jedi who’ve succumbed to the Dark Side and, while not Sith Lords, they do have some military authority.

With Reva after Obi-Wan, expect not just a clash of lightsabers, but a clash in ideologies as both former Jedi meet in a world where the Jedi have fallen.

The Inverse Analysis — Obi-Wan Kenobi is already shaping up to be one of the buzziest shows of the year. The reputation of McGregor’s Obi-Wan has only grown in the hearts of fans since Revenge of the Sith. That his show will likely revolve around Obi-Wan and Uncle Owen getting into middle-aged buddy adventures against the Empire is exciting in ways that even The Mandalorian can’t touch.

Obi-Wan Kenobi will begin streaming on Disney+ on May 25.