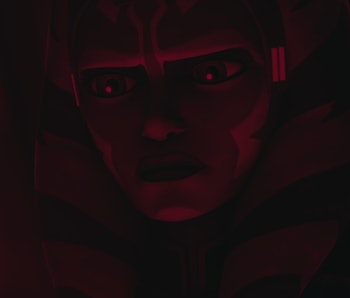 The opening crawl of Revenge of the Sith bizarrely told Star Wars fans there were "heroes on both sides" of the Clone Wars. The weird thing is, 15 years after the fact, nobody expected that some of those heroes might turn out to be the Clones. Or, at the very least, one specific Clone: Captain Rex.

Revenge of the Sith established that all the Clones became Jedi-murderers thanks to one secret code-word implanted in their brains. But the animated Star Wars shows, Rebels and The Clone Wars, added a wrinkle to that: Not all the Clones were bad, and a few, managed to figure out a way around their programming.

The thing is, we never knew how certain Clones (okay, Rex specifically) were able to ignore Order 66. Rebels established that Rex and two other troopers got around it, claiming they removed their own chips, but we never saw that moment until the big Season 7 finale.

It turns out, Clone Wars maestro Dave Filoni was fully aware that explaining this specific plot point was going to be tricky as hell. Here's how Ahsoka helped close this plot hole forever.

According to a recent Nerdist interview with Dave Filoni (written by longtime Star Wars journalist Amy Ratcliffe), the solution to actually depicting the moment where Rex goes against Order 66 came down to a Jedi mind-meld with Ahsoka.

"It was a very tricky thing to explain and justify this chip that’s in their heads," Filoni admitted. "And it should be difficult to find. Otherwise, why isn’t everybody removing them?"

Before The Clone Wars finale (specifically the episode "Shattered") we had no real idea how Rex could mentally and physically resist the power of the commands entered into the brains of every single member of the Clone army. In Season 6, The Clone Wars (episodes 1-4) the technical nature of how Order 66 is carried out is explained in very specific detail. Basically, each Clone has a piece of tech in their brain that can prevent them from doing something, or, in the case of Order 66, make them do something.

The phrase "inhibitor chip" is actually part of the deception. The official explanation as to why the Clones have the chips at all hides the reason they actually have them. In other words, Dooku and Palps made it look like the cloners on Kamino built a fail-safe into the design of the Clones — a brain control chip that would stop the Clones from doing something the Republic didn't want. But the audience knows this is actually just a way of hiding Order 66.

None of this is in Revenge of the Sith, but because Clone Wars Season 6 made the chips explicit, Season 7 had to show how all that happened with Rex and also demonstrate how hard the chip was to find. Ahsoka couldn't rely on her scanners. She needs to go get into Rex's mind.

"I needed to rely on an arc that maybe you had seen and maybe you hadn’t seen," Filoni said, referring to Rebels. "I didn’t have a lot of time to do all of this."

"What I came up with was this idea that because she is connected in her own way to Rex and they’re good friends and that she cares about him, that she needed literally to get inside his head and maybe to open up his mind."

In the episode, this plays out when Ahsoka and Rex both say: "I'm one with the Force and the Force is with me." That's a reference to the refrain spoken by the monk Chirrut Îmwe in Rogue One, which Filoni says was intentional. However, it's also a subtle way of explaining that Ahsoka is in Rex's head, helping guide him away from Order 66.

"She’s in there and allowing him to open up his mind and it reveals the problem to her, to the world," Filoni says.

To put it another way: If the Clone Wars was a game of rock, paper, scissors, it appears a Friendly Jedi Mind Meld beats Order 66, but that Order 66 beats Jedi Who Is Unaware of Order 66.

This doesn't quite explain how the other two Clone Troopers we met in that Rebels episode had their chips removed. In "The Lost Commanders," an older Rex told Kanan that he Wolffe, and Gregor, they had already removed their chips before Order 66. We now know this is slightly different in reality.

Rex implies to Kanan that he removed his chip before Order 66 happened. But in The Clone Wars finale, we saw a slightly different version of events. So was Rex lying? In classic Star Wars fashion, Filoni says no. Rex told the truth, from a certain point of view:

"That’s where you can get hung up on continuity so much that you don’t actually tell a story that’s about real people... Rex at that moment tells Kanan the point of view Kanan needs to understand who Rex is and what he’s really about. Later on, do they have a scene where they get into the truth of it that was a lot scarier? Probably, but I think Kanan also knows that... Kanan doesn’t need to know the minute details of Rex’s life."

The Inverse Analysis — We'll probably never get a full explanation for how Wolffe and Gregor got their chips removed, and we probably don't need one. But for now, if Star Wars fans want, they can all start scribbling some fanfic in which other Jedi, who were perhaps good buddies with those two Clones, performed similar mind-links in the style of Ahsoka.

Who knows, with rumors about Clone returns in Season 2 of The Mandalorian, it seems possible that Ahsoka herself may yet have more to say about Order 66, perhaps, why Baby Yoda managed to escape it.

The Clone Wars is now streaming on Disney+.