“The key to hunting Jedi is patience.” 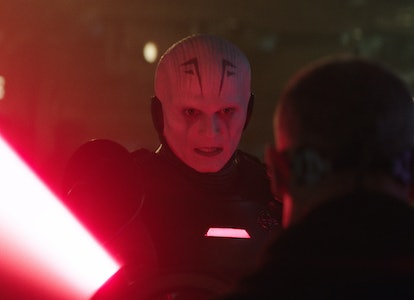 The first trailer for Obi-Wan Kenobi doesn’t hold much back. From its opening scene of Obi-Wan (Ewan McGregor) literally watching over a young Luke Skywalker on Tatooine to its effective use of “Duel of the Fates,” the first teaser for Lucasfilm's latest Disney+ series packs a lot of exciting Star Wars moments into its short runtime. However, what the trailer perhaps does better than anything else is communicate the constant danger that McGregor’s Obi-Wan is in when the series begins.

It does that by placing just as much focus on Obi-Wan Kenobi’s primary villains as it does on McGregor’s exiled Jedi. Specifically, the Obi-Wan teaser features several moments with the show’s Inquisitors, who are force-sensitive warriors trained to hunt Jedi by the Empire. The teaser is even narrated by the Grand Inquisitor, the leader of the Empire’s Inquisitorius Program.

Fans of Star Wars Rebels are already very familiar with the Grand Inquisitor, but they should be prepared to see the character in a new way in Obi-Wan Kenobi.

Who plays the Grand Inquisitor in Obi-Wan Kenobi?

In Star Wars Rebels the Grand Inquisitor was voiced by Jason Isaacs, who brought the character to life in an unsettlingly dignified, sinister way. The character’s dialogue and actions in the Obi-Wan Kenobi teaser suggest that those aspects of his personality will be present in the new Disney+ series, despite him being played by a different actor and featuring a slightly different design than he did in Rebels.

Following the Kenobi trailer’s release, StarWars.com confirmed the Grand Inquisitor is played by Rupert Friend, who’s probably best known for his breakout turn as Peter Quinn in Homeland. Friend’s version of the Grand Inquisitor also looks slightly different than the one in Star Wars Rebels did, and fans haven’t been shy when it comes to sharing their opinions about those differences.

But what matters more than anything else is whether the Grand Inquisitor manages to be as intimidating in Obi-Wan Kenobi as he is in Rebels. We won’t know if that’s the case until Kenobi finally premieres, but its first teaser certainly suggests that the Grand Inquisitor will be a force to be reckoned with.

How many Inquisitors are there?

The Grand Inquisitor isn’t the only member of the Empire’s Jedi hunter program featured in the Obi-Wan Kenobi teaser. It features appearances from several Inquisitors, including the Fifth Brother, a Star Wars Rebels villain who will be played by Fast & Furious star Sung Kang in the new show. The trailer also focuses heavily on a new Inquisitor named Reva, who will be played by Queen’s Gambit star Moses Ingram.

It’s not clear exactly how many Inquisitors there were during the Empire’s reign. The highest-numbered of the Jedi hunters that we know about is the Tenth Brother, but that doesn’t mean there were only 10 Inquisitors, and it’s entirely possible that Lucasfilm will introduce more members of the program in future movies and TV shows.

The Inverse Analysis — Obi-Wan Kenobi will mark the first time that Star Wars fans get to see the Empire’s Inquisitors brought to life in live-action form. And by featuring appearances from not just one but four different Inquisitors, the series’ teaser makes it clear that Kenobi isn’t wasting that opportunity.

Even better, if the tone of the Obi-Wan trailer is any indication, it looks like the Inquisitors will be even more deadly and intimidating in the new Disney+ series than they’ve ever been before.