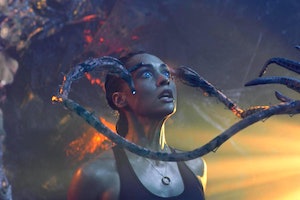 As the weather turns pleasant this April, the urge to go outside is strong — but the best science fiction that Netflix has to offer may be stronger still.

At the end of the month, viewers will lose access to three of the best, action-heavy apocalypse films on Netflix: I Am Legend, Snowpiercer, and Doom. A more recent big hit for streaming, Skylines, can keep us entertained, along with the grand return of The Time Traveler’s Wife. It’s not the best movie starring Rachel McAdams as a woman married to a time-traveling man, but it’s still worth a watch.

If you hanker for something beyond the realm of the probable this April, then you can do no better than these 11 shows and movies which use every trick in the science fiction playbook to tell gripping stories of love, loss, and longing. As always, we’ll focus on what’s new, original, or leaving Netflix soon.

According to Inverse writer Dais Johnston, Skylines is the best sci-fi heist movie on Netflix. The film is the third installment in a franchise that began with a brain-stealing alien invasion — Skylines is set many years later when humans live in peace with “pilots” — people transformed by the invaders into brainwashed creatures. In this episode of the saga, a virus emerges that threatens to turn back the clock and transform pilots into the vicious killing machines they once were. A superpowered young alien-human hybrid named Rose is tasked with joining a mission to stop the virus spread before it’s too late.

“When the villain says ‘Now I am become Death, the destroyer of worlds!’ it’s clear that in this sub-genre, subtext is for cowards,” Johnston writes. The complex heist Rose and her rag-tag crew pull off is a spectacle, to say the least. Best of all? You don’t even need to see the first two movies to understand this one.

Skylines was added to the Netflix library on March 18, 2021.

In this raucous superhero comedy two childhood friends — Emily (Octavia Spencer) and Lydia (Melissa McCarthy) — reunite after years apart when Emily develops a treatment to give average people superpowers. Lydia wields super-strength and Emily can turn herself invisible. Together, they form Thunder Force, and the duo does battle with super-powered “Miscreants” and supervillain “The King” (played by Bobby Cannavale) in an effort to save Chicago.

Reviews aren’t out yet, but the film’s trailers and clips suggest the movie is both lighthearted and hilarious. Thunder Force was written and directed by Ben Falcone (McCarthy’s husband). His previous films include Tammy, Life of the Party, and Superintelligence. Both received middling reviews, which doesn’t bode well for Thunder Force. But perhaps like Murder Mystery — despite (potentially) poor reviews — it will be watched by millions of people for the easygoing laughs regardless.

Thunder Force will be unleashed on Netflix on April 9, 2021.

Henry DeTamble is involved in an accident that causes him to sporadically travel through time at random, drawn towards people, places, and events with special meaning to his own disordered personal timeline. Chief among them is his titular wife, Clare. Based on a novel by Audrey Niffenegger of the same name, The Time Traveler’s Wife recounts the couple’s chaotic life together. It’s a sappy, melodramatic story in many ways, but the film itself is also dazzling in terms of the execution of time travel as a plot device.

As far as romantic sci-fi films involving time travel go, The Time Traveler’s Wife is pretty good. There are some problematic character dynamics at play — like how Henry stalks Clare as a little girl and this attention essentially leads her to adore him for the rest of her life. But ultimately, the movie captures a sense of wonder that time-travel hijinks often miss these days.

The Time Traveler’s Wife travels back to Netflix on April 1, 2021.

One could argue that Yes Man, which stars Jim Carrey, is not science fiction, but it is one of several Carrey films that feel like sci-fi. The reason why is to do with how forcefully the plot and characters commit to the fantastical core premise of the story. Think Liar Liar, but far more wholesome.

After a miserly loan officer named Carl (Carrey) attends a conference put on by an inspirational guru, he’s compelled to say “Yes!” to every opportunity presented to him — no matter what it entails. His life becomes overflowing with both positivity and chaos as he gets to know his annoying boss, spends time with people he had ignored, and takes up eccentric new hobbies like flying, bungee-jumping, and studying Korean.

This deeply underrated film is an utterly joyful exploration of the potentials hidden in the many opportunities we don’t take in life. Does that make it sci-fi? We’ll say yes to that.

Have you ever thought your mom’s new fiancé is hot... or, more accurately, a little too hot? Creepy intrigue runs throughout What Lies Below, but the film has a dark twist, placing it at a Lovecraftian middle point between science fiction and horror.

When she returns home from camp, 16-year-old Liberty Wells is flabbergasted to find her mother engaged to a dude who is a little too handsome, a little too smart, and a little too charming to be real. Forget what Liberty’s misgivings say about the standards she has for her mother, and focus instead on the obvious: If he’s fool enough to fall for her mom, this guy might not even be human!

To make matters more abundantly clear to the viewer, the fiancé is “studying a few species” at the nearby lake, and thinks “weird is cool.” Very, very quickly, Liberty suspects this man might be a literal monster. Terrifying, bloody, and unsettling, What Lies Below is not for the faint of heart.

What Lies Below will be on Netflix starting April 4, 2021.

It’s always a bit bewildering when Netflix adds a movie only to have it taken away a couple of months later. In this case, I Am Legend, starring Will Smith, arrived on the streaming platform in early March but it will be gone by May. Watch it ASAP.

Based on the novel of the same name, the film depicts a world in which a genetically re-engineered measles virus can cure cancer — until it mutates horribly. Some 90 percent of the world's population is killed. Nine of the remaining 10 percent turn into vampiric Darkseekers, brainless and fast-moving zombies vulnerable to UV light. The remaining one percent, including protagonist Robert Neville (Smith), are immune to the virus. As an army virologist, Neville is uniquely suited to surviving for several years while trying to engineer a vaccine using his own blood.

The vibes resemble those of the video games in The Last of Us series with urban environments reclaimed by nature, but the filmscape’s beauty is offset by the brutal threat of zombies. Say what you will about the divisive ending, but I Am Legend gets by on the strength of Smith's acting and charisma, paired with an arresting script.

This 2013 dystopian film about a perpetually moving train hurtling through the icy wasteland of post-apocalyptic Earth contains one of the most haunting lines in all of cinema. And despite how ridiculous the line is, the way actor Chris Evans delivers it will make you laugh out loud at the same time as haunting your dreams.

Snowpiercer was made by visionary South Korean director Bong Joon-ho (Okja, Parasite). In the movie, a failed climate-change experiment has plunged the world into a new Ice Age, and the only survivors are those lucky — or unlucky — enough to have made it aboard this absurd train. And it ain't stoppin'.

Evans plays a grizzled survivor who rides alongside the oppressed folks at the back of the train. He leads a violent uprising against the aristocrats in control. If you haven’t seen this film yet, the time is nigh. Because it’ll leave Netflix soon.

The Snowpiercer train leaves the Netflix station on April 30.

Bruce Lee kicked ass in the original Green Hornet series in the ’60s, and though this 2011 film adaptation starring Jay Chou and Seth Rogen (yes) pales in comparison, it’s worth watching anyway for the compelling visuals and odd-couple dynamics.

Rogen plays wealthy playboy Britt Reid who develops a friendship with his deceased father’s mechanic and friend. The mechanic also happens to be a master martial artist. That turns out to be handy, as the two accidentally intervene in a mugging and decide to become a crime-fighting duo who pose as criminals to lure their miscreant prey.

The Green Hornet is a strange movie that tries to marry superhero vigilantism with Rogen’s brand of stoner comedy. Directed by Michel Gondry (Eternal Sunshine of the Spotless Mind) and written by Rogen alongside longtime collaborator Evan Goldberg, it’s an unusual experiment that offers plenty of laughs and fun action.

The Green Hornet drives away from the Netflix library on April 30, 2021.

April may be your last chance to see one of the worst movies of all time. The weirdest thing? The cast is really good, and the story is based on one of gaming’s most iconic franchises.

Originally released in 2005, Doom stars Dwayne “The Rock” Johnson, Karl Urban, and Rosamund Pike in what is essentially a brainless, sci-fi action movie loosely based on the beloved Doom 3 video game. A team of space Marines is called to a science facility on Mars after there’s a security breach. It turns out a mass murderer has been injected with contagious alien DNA that can mutate anybody into a monster. This dumb movie is poorly written and utterly bizarre.

“Doom is like some kid came over and is using your computer and won't let you play,” writes critic Roger Ebert in his review.

On one hand, this movie is terrible. On the other, it is “weirdly brilliant,” and a laughable trainwreck. At the very least, it’s fun seeing The Rock so young and small.

Doom will be removed from the Netflix library on April 27, 2021.

“How far would you go to find ‘The One?’” It's the provocative question at the center of this series, which is based on a book of the same name. With a premise that feels like an extended Black Mirror episode, in The One dating has been broken down into a science. All it takes is a DNA test for anyone to find their genetic soul mate. But after someone dies, the woman who started it all comes under investigation. Of course, she has more than a few skeletons in her own closet.

The story follows the lives of several characters changed by the service. Chief among them is the mogul who pioneered the tech: Rebecca Webb (Hannah Ware). Inverse’s review of the eight-episode first season praises the nail-biting, sci-fi drama: “The One relishes in the gray area between heroes and villains, between love and betrayal, and between utopia and dystopia.”

Will the series be the right match for you?

In the crowded arena of cerebral animation made for a more mature audience — think Rick and Morty and Adventure Time — Netflix’s Midnight Gospel is an absolute revelation. Its original release on April 20, 2020, is an obvious nod to the stoner following shows like this tend to accrue, but its experimental nature makes it so much more than that.

Set in a vibrant, far-out future where “spacecasters” have replaced podcasters, The Midnight Gospel chronicles the adventures and interviews conducted by Clancy Gilroy, a pink dude in a wizard hat. Using a malfunctioning universe simulator, Clancy travels through various alien worlds to interview guests for his show. Virtually all of the dialogue comes from series creator Duncan Trussell and real-life interviews conducted on The Duncan Trussell Family Hour podcast with mystics, gurus, and other religious leaders. Topics range from drugs and spirituality to the nature of the multiverse.

The Midnight Gospel juxtaposes these deep conversations with vibrant animated worlds, brain-melting sci-fi concepts, and even a compelling overarching narrative for Clancy that makes the entire series essential viewing.