“subtext is for cowards.” 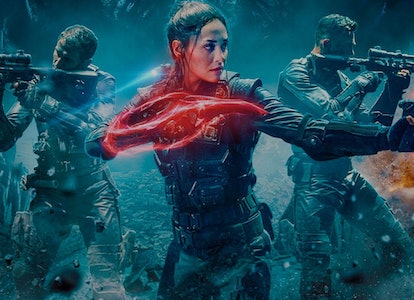 How do you make a good sequel? It has to tie together old lingering questions and introduce some more, but most importantly, it needs to stand as a complete narrative all on its own.

This 2020 film takes this concept to the extreme: one of the best sci-fi movies currently available on Netflix — and yet, it’s the third installment in its franchise.

Skylines is a 2020 film written and directed by Liam O’Donnell. It’s a sequel to 2017’s Beyond Skyline, which is, in turn, a companion piece set concurrently with the events of the 2010 film Skyline. But while there’s two whole movies worth of worldbuilding behind Skylines, the narrative is quickly and effectively communicated in the first ten minutes through a straightforward voiceover.

The film stars The 100’s Lindsey Morgan as Rose, a superpowered alien/human hybrid who was forced to sacrifice thousands of her own people in order to convert “Pilots” — humans converted into brainwashed creatures by the alien Harvesters — back to sentient beings. Five years later, Rose is so wracked with the guilt she goes into hiding, but her brother, a Pilot, convinces her to help with a new threat.

A pandemic is turning all the Pilots back to their original hostile, brainwashed state. The only solution is procuring the core drive of the ship Rose destroyed five years ago. It’s then the film switches from Syfy channel fare to an incredibly sophisticated science-fiction heist.

Skylines has all the heist movie hallmarks: a ragtag group of individuals, each with a special skill, and a multi-step plan that could go wrong at any moment. Rose must battle her own guilt, her backstory, and ultimately herself in order to save the entire world, again.

Yes, the dialogue is a little hacky, but in a way that adds campy gravitas to every scene. When the villain says “Now I am become death, the destroyer of worlds,” it’s clear that in this sub-genre, subtext is for cowards. There’s something so watchable about a movie just throwing everything at the script. Every trope you could hope for is fit in somehow.

When I watched Skylines, I had no idea it was even a sequel until an hour in, let alone the third installment in a franchise. While the second film, Beyond Skyline, is also on Netflix, check this one out first and appreciate just how impressive complex worldbuilding can be when combined with confident and unabashed dialogue and a whole lot of sci-fi action fun.

Skylines is now streaming on Netflix.