'The One' review: Netflix's new sci-fi drama will make you fear true love 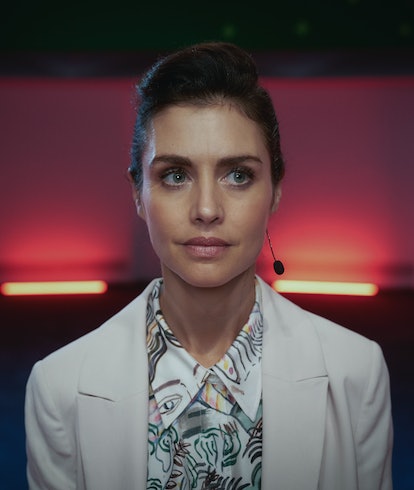 Imagine a world where true love can be yours in an instant. All you need is a single strand of hair. Sounds perfect, right?

In the new Netflix science fiction series The One, online dating gets more than just an overhaul; it becomes completely irrelevant.

Eight episodes in total, The One (streaming March 12) is Netflix’s latest sci-fi effort, this time examining the ramifications of a technological innovation that renders dating obsolete. The service’s name: The One. What does society look like when you can discover your genetically guaranteed soulmate? In the case of The One, the results are brutal: spikes in divorce rates, established couples ripped apart by jealousy — and in the case of the series’ main character, The One’s innovative creator Rebecca Webb (played by Hannah Ware), the result is an unwelcome journey straight into the spotlight, skeleton-filled closet in tow.

The One follows a number of different characters as their lives are changed by the service. One is newly matched, and questions things about herself as her soulmate isn’t entirely what she expected. Another is married and gets jealous of her husband’s hypothetical match.

And then there’s Ware as Rebecca, a powerful tech mogul whose image hides a deadly secret she’ll do anything to hide. Imagine Black Mirror meets Big Little Lies.

“Rebecca had to create quite a hard shell in order to get what she wanted,” Ware tells Inverse about her role in the series.

That shell comes out in full force in the series’ very first scene. In it, Ware’s Rebecca gives an impassioned press conference about the existence of true love — but later, in that same episode, she blackmails a member of Parliament who seeks to limit genetic profiling.

Somehow, it’s difficult to see Rebecca as a villain, despite her being at odds, either ideologically or personally, with every other protagonist of The One’s many storylines. “As the actress, I have to humanize her in some way,” says Ware, “but whether she’s a hero or a villain is up to the viewer.” In Ware’s eyes, at least, Rebecca is a woman trying to make the world better, trying to make people’s lives better. And while chasing that dream no matter the cost is her mission, it’s her downfall as well.

The One relishes in the gray area between heroes and villains, between love and betrayal, and between utopia and dystopia. While the series wrapped filming mere weeks before the Covid-19 pandemic shut down sets globally, the storyline still feels all too familiar to those still trying to date while social distancing. In the first episode, two characters are matched by The One, but one lives in London, the other in Barcelona. “They have their first initial meeting via Zoom, or whatever they're on, and there's this palpable attraction. I'm glad it still works.” Ware says. It may not be intentional, but it sure adds some realism.

Rebecca’s role as scientist-turned-matchmaker-turned-tech-mogul is shown over the course of many years, with the one through-line being her evolving style. In the flashbacks, Rebecca wears casual jeans, her hair down in loose waves. But in the present, she wears what could only be described as a uniform: oversized yet tailored suits, patterned button-down shirts, hair pinned up in a pompadour and bun.

In the tech world, this “uniform” is par for the course. Steve Jobs, of course, wore his statement turtleneck, and Mark Zuckerberg reigns over the Facebook empire while wearing the same hoodie every day. But a female CEO wouldn’t have the same room to dress down.

“I know that we're doing much better in the workforce,” says Ware, “but I still feel that as a woman, there is a little bit more we have to prove.”

“They went to such great lengths and have to be quite ruthless in the wake of that,” says Ware. “I was looking at Thatcher because I found her fascinating in that respect. Of course, she was the Prime Minister in the eighties. That was a very different time for women, but I think a lot of it still stands.”

Behind the costuming, the deceit, the sci-fi twists, The One is a science-fiction-driven story of how we cope with the messy business of love, and how it clashes in an increasingly tech-reliant world. Nowadays, so much can be predicted, tracked, and manipulated using science. Attraction seems to be the final frontier. While there are dating services that do in fact use genetic information, there’s nothing like The One yet. But that’s what makes it such a watchable — and dangerous — show.

“It’s all about love,” Ware says about her character specifically and The One at large, “but love is also a weakness.”

The One is streaming on Netflix starting March 12.