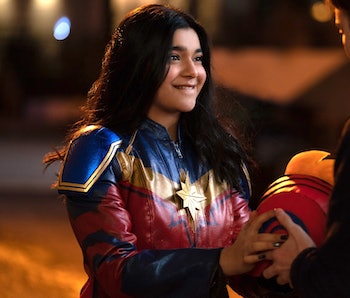 The Marvel Cinematic Universe just made a huge change to Ms. Marvel. You might as well call it a mutation. If there is any doubt about what the MCU is cooking up with the X-Men, one only needs to look deep in the credits for the Ms. Marvel Disney+ series. We don’t mean the post-credits scene either. We’re talking about the actual credits.

Warning: Spoilers for Ms. Marvel Episode 6, “No Normal” ahead.

In the closing moments of Ms. Marvel on Disney+, Kamala Khan (Iman Vellani) is enjoying her status as a neighborhood superhero when her best friend, Bruno (Matt Lintz), comes to her with some weird news.

Having looked into Kamala’s genetic data a little more — you know, as all teenage boys with crushes do — Bruno tells Kamala that it’s not her family DNA that lets her tap into the Noor dimension but Kamala’s own genetics. “When I compared you to the rest of your family, something still seemed off,” Bruno says. “Kamala, there’s something different in your genes. Like ... like a mutation.”

It’s not what Bruno says that hints at the imminent arrival of the X-Men in the MCU, but what is heard next: the guitar riff from X-Men: The Animated Series, the classic show fondly remembered by ‘90s kids who spent Saturday mornings watching Fox Kids.

While it’s still not confirmed if Kamala is actually a mutant, or if she’s an Inhuman and Bruno just doesn’t have the word for it (the Inhumans are a secret society, after all), there’s no denying that the X-Men theme song is heard in the series.

The proof is in the actual end credits, which lists “X-Men ‘97 Theme” in the song credits. The series theme was composed by Ron Wasserman, but the credits name Haim Saban and Shuki Levi, who were the music executives in charge of X-Men: The Animated Series.

While the MCU is still carefully playing with bringing the X-Men into the fold outright, Ms. Marvel is now the second time in Phase 4 the MCU acknowledges them. It was a short two months ago when Doctor Strange in the Multiverse of Madness had Patrick Stewart in a surprise cameo role, reprising another version of his Charles Xavier. That film also listed “X-Men ‘97 Theme” in the credits, and the same motif was heard when Stewart appeared onscreen.

If you’ve forgotten, a new X-Men series is in production for Disney+. In 2020, Disney and Marvel Studios announced X-Men ‘97, a sequel series to X-Men: The Animated Series that, based on its title, picks up where The Animated Series left off. (The show ended its final season in September 1997.) It appears that both Multiverse of Madness and Ms. Marvel feature their own versions of what will be the theme of X-Men ‘97.

As for how Kamala Khan will be re-canonized as a mutant in the MCU, the specifics remain to be seen. Did Kamala’s powers manifest through her adolescence, which is how most mutants get their powers? Or did Kamala’s inheritance of her great-grandmother’s ancient bangles trigger her transformation, effectively functioning as her “Terrigenesis,” the Inhuman process of transformation? Is your head spinning yet?

Perhaps we’ll find answers in next year’s The Marvels or in a future Phase 5 project. (Mark your calendars because San Diego Comic-Con is one week away, and Marvel Studios has a huge panel scheduled for the convention.) Regardless of her species, Ms. Marvel has introduced an exciting and daring change to Kamala, a character who debuted in comics as an Inhuman and has been a critical part of storylines like Inhumans vs. X-Men.

Whether she’s a mutant, an Inhuman, or something else entirely, Kamala Khan will forever remain a superhero from Jersey City.