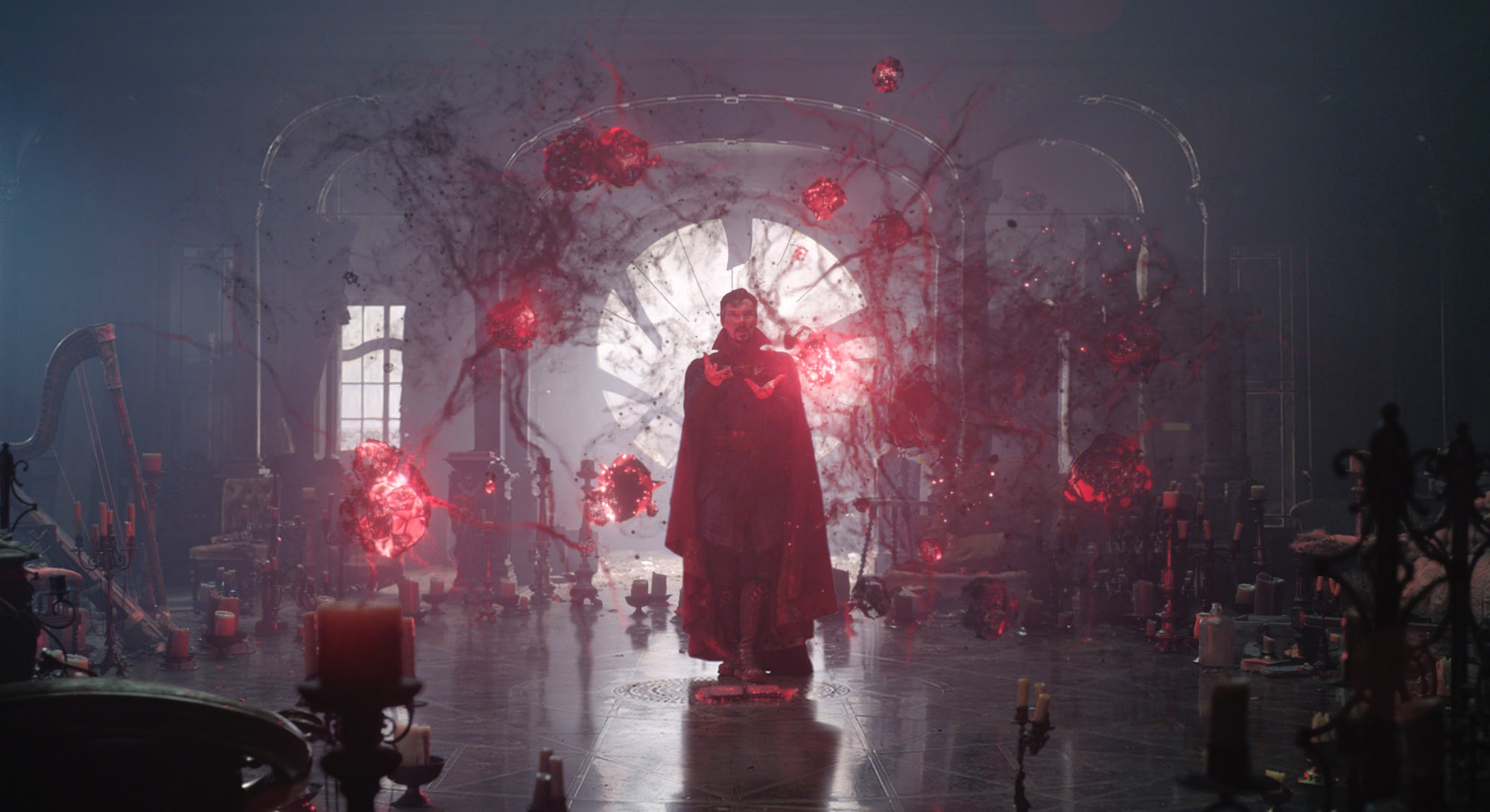 When audiences met Doctor Strange almost six years ago, we learned immediately of his prime weakness: His hubris.

In the bewitching Doctor Strange in the Multiverse of Madness, directed by splat auteur Sam Raimi and scripted by Michael Waldron, the Marvel Cinematic Universe finally grills its title superhero — and its familiar (surprise) villain.

Multiverse of Madness is delightful, unhinged commercial art that is as complex as the multiverse itself. It’s thoughtful as it is stylish, as icy as it is effervescent. With equal parts grace and gore that pushes the PG-13 rating it’s saddled to its limits, Multiverse ascends above Marvel’s most obvious limits as a blockbuster factory by placing focus on the man at the center — and the piercing daemonic eyes staring back at them.

A sequel to the 2016 film (and pretty much everything Marvel has done since) Benedict Cumberbatch’s most prolific role is put through the proverbial wringer when Doctor Strange’s most consequential decisions in the MCU are at last questioned point-blank. Remember, it was Stephen who let Thanos erase half the universe. Strange is confident, maybe arrogant enough to know it was the right thing to do. The Avengers won in the end. But that’s not easy to hear when you’ve lost people in the interim.

An unexpected path for Strange’s redemption arrives in the form of America Chavez (Xochitl Gomez), a teenager whose rare ability to travel realities has her targeted by an unknown entity. To help her, Strange seeks the help of his fellow mystic sorcerers, including Wong (Benedict Wong, who proves he is and always has been worthy to lead a solo project) and fellow Avenger, Wanda (Elizabeth Olsen), whose evolution into the fearsome “Scarlet Witch” is a thing to behold. What unfolds is a romp through the multiverse, a network of infinite alternate Earths that differ in histories and physics.

“Raimi’s enlistment is a stroke of brilliance.”

But Multiverse of Madness’s secret weapon is director Sam Raimi, the mind behind multi-genre trilogies Evil Dead and his own Spider-Man. Raimi stepped in after Marvel and Doctor Strange director Scott Derrickson split over creative disagreements. Derrickson was never allowed to imbue the franchise with his horror sensibilities, but Raimi’s made a career out of mischievously smuggling horror inside other genres — and sometimes the other way around.

For Marvel, Raimi’s enlistment is a stroke of brilliance. It’s clear with Multiverse of Madness that the MCU intends to venture where it hasn’t gone before but not tread far. That Raimi is actually a fully assured and developed artist — and eccentric, known to wear full suits and ties to the sets of movies where fake blood cake the floor — is maybe more than Marvel bargained for.

Like its own characters, Multiverse of Madness is a time for Marvel to traverse new creative territory without committing to sticking around. It’s bold all around. Whether that boldness is actually deserving of the credit, or it alone will give Marvel passing grades for trying, is yet to be certain. Multiverse isn’t a “Marvel horror movie,” to do so is to also call car commercials adventure films. But it’s absolutely a Marvel movie that dares to flirt with darker, deeper dimensions, and it succeeds largely due to the efforts of a self-assured veteran director.

Raimi’s best feature as a filmmaker is his camerawork. His movies, and Multiverse especially, are packed with Hitchcock homages and B-horror zooms and whips, which go nicely with Ditko-like surrealism. It’s very fun to see the MCU have some personality, but Raimi is also wise enough to know when to keep things restrained and simply stay on actors simply doing their damndest. Some of the most enthralling moments of Multiverse are its prolonged, lingering shots of faces. Faces that are happy, faces that are sad, faces that are terrified.

That such faces include Elizabeth Olsen is a treat, for her tiny adjustments in her expressions contain a galaxy of meaning. A fallen hero themselves, Wanda’s heel turn will go down as one of the best in the genre’s history thanks in large part to their actor, who smothers the role in oil and vinegar. (Enough truly cannot be said for Olsen as Wanda here. There hasn’t been a superhero actor this in tune to their role since maybe Christopher Reeve as Superman.)

“Wanda’s heel turn will go down as one of the best in the genre’s history.”

For all the gasp-worthy surprises and attempts to crack the veneers of PG-13 — bear witness to crimson ooze from the crevices of Hasbro action figures — this entry is best understood as a signature Sam Raimi movie, where an expert visual storyteller simply makes the most of an astronomical budget. Doctor Strange in Multiverse of Madness relies on so much old-school visual storytelling to believe that maybe Marvel’s movies are finally evolving beyond its staid quippy dialogue, lightweight action, and putrid palettes. It’s probably not the case, but Multiverse casts a long enough spell to have hope again.

Multiverse of Madness is about many things, most of all it’s wrestling against the reality you’re fated to live in. When the screaming over surprise cameos quiets down, what Multiverse exposes is a man tortured by his decisions. One can only have so much power in the universe. For Doctor Strange, a man who used to believe he was the center of it, that’s probably the scariest thing to discover.

Doctor Strange in the Multiverse of Madness opens in theaters on May 6.