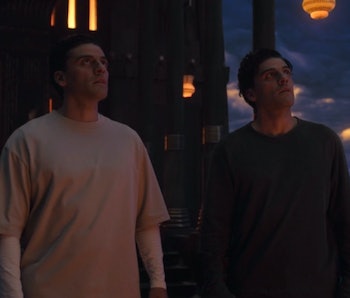 In Episode 5 of Marvel’s Moon Knight, Marc Spector (Oscar Isaac) goes on a painful trip down memory lane. The journey, which is forced on him by Steven Grant and the Egyptian goddess Taweret (Antonia Salib), makes Marc relive some of his worst memories, including several childhood instances of being abused by his mother. Ultimately, the journey helps Steven understand Marc better.

But while Episode 5 does a lot to heal the relationship between Marc and Steven, it never addresses whether the latter is the only other identity that lives in Marc’s mind.

Marc’s Identities — Heading into the premiere of Moon Knight’s fifth episode, many Marvel Cinematic Universe fans predicted that it would officially confirm one of the biggest theories surrounding the Disney+ series: That Marc Spector has at least one other alternate identity in addition to Steven Grant.

The general consensus among fans is that Marc’s rumored other identity will end up being Jake Lockley, a persona Marc frequently assumes in Marvel’s Moon Knight comics. However, with only one episode to go in the show’s first season and plenty of story threads left for Moon Knight to wrap up, the chances of the series introducing another one of Marc Spector’s alternate identities next week seem slim.

But does that actually mean Jake Lockley won’t show up in Episode 6?

The Red Sarcophagus — There are reasons to believe Moon Knight is building towards the debut of Jake Lockley, or an identity similar to him.

The series’ third episode features a brief but notable moment where Marc and Steven both lose control of their body and express confusion over what happened. Meanwhile, in Episode 4, Marc sees a red sarcophagus hidden inside one of the rooms of his mental hospital.

The sarcophagus is similar to the one that Steven Grant was trapped in earlier in the episode. As a result, some fans believe the red sarcophagus is also holding one of Marc’s alternate identities captive. Unfortunately, it remains to be seen if that theory is correct, or if it’s even Jake Lockley who’s trapped inside.

The Inverse Analysis — It’s unclear if Moon Knight Episode 6 will answer any of the questions outlined above. The show already has a lot that it needs to do in order to bring its story to a satisfying conclusion, which means there’s a very real chance Steven Grant will be the only one of Marc Spector’s alternate personalities that viewers meet in the Disney+ series’ first season.

That said, Oscar Isaac did confirm in a recent interview with Comicbook.com that “things are pointing towards the idea that it’s not just Steven and Marc in that system, that there's possibly others.” So it’s definitely possible Jake Lockley, or someone else, could take over Marc Spector’s body in Moon Knight’s Season 1 finale next week.

It might be a good thing if they did, because both Marc and Steven could certainly use whatever help they can get at this point.