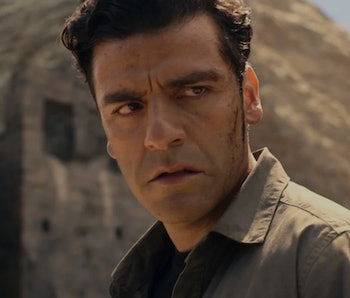 Marvel Comics is full of Jewish superheroes. Ben Grimm (The Thing) is a Jew. So is Magneto. Maybe Peter Parker, too. But until now, the Marvel Cinematic Universe has mostly skirted the topic of religion. Moon Knight changes this — and confirms that Marc Spector is indeed a member of the Jewish faith — by depicting an important religious custom: Shiva.

Warning: Some spoilers ahead for Moon Knight Episode 5.

First, a bit of in-universe context: Moon Knight Episode 5 finally gives us the origin story the show has been holding back. Through the narrative device of needing to balance their collective soul for the afterlife, Marc and his alter ego Steven Grant explore their shared history. This includes a look at how Khonshu recruited Marc in the first place, but it also reveals the childhood trauma that caused him to create Steven.

As a child, Marc took his younger brother to a cave to play. When it started to rain, the cave flooded and Marc’s brother drowned. His mother never forgave him, becoming both verbally and physically abusive to her son to the point that he subconsciously created Steve Grant as an escape from the horror of his own childhood.

In Judaism, Shiva is the religious practice of mourning the dead through a series of customs and obligations that guide the bereaved through the process. The word translates to “seven” and refers to seven days of mourning immediately following the burial observed by immediate family members in which one “sits Shiva.”

During Shiva, the only thing you’re technically supposed to do is pray — you’re not even supposed to leave your home unless it's to go to the synagogue. Friends and family typically visit the home of the mourner during these seven days to help take care of them and keep them company, though sitting Shiva can feel like a joyous occasion at times.

We actually see two depictions of Shiva in Moon Knight Episode 5, if briefly. At Marc’s brother’s Shiva, his mother lashes out at him. Yelling aside, it’s a solemn scene with a small group of family members sitting in a dimly lit living room. You might not even realize what you were seeing if not for the yarmulke on one man’s head.

Later in the episode, after we learn that Marc/Steven’s mother is dead, we see Marc’s attempt to attend her Shiva roughly two months before the show’s story begins. Marc stands in front of his own home (the one he fled as a teenager) but can’t will himself to enter. Viewing this moment from the present, he realizes it’s when the psychological walls between him and Steven Grant began tumbling down.

So is Marc Spector Jewish?

Definitive answer: yes, though he doesn’t seem to be particularly observant at the moment. In the comics, Marc is also a Jew. For once, the two mediums match up in this way. What’s next? A Jewish Spider-Man?

More like this
Entertainment
Jan. 25, 2023
The MCU could bring back a hero from its most underrated TV show
By Dais Johnston
Entertainment
Feb. 3, 2023
Marvel just revived its primate assassin — What to know about Hit-Monkey
By Mónica Marie Zorrilla
Entertainment
1 hour ago
Quantumania Producer Confirms an Ant-Man 2 Fan Theory Was Right All Along
By Eric Francisco
LEARN SOMETHING NEW EVERY DAY.
Related Tags
Share: