Your brain has been colonized by an ancient consciousness from beyond space-time.” 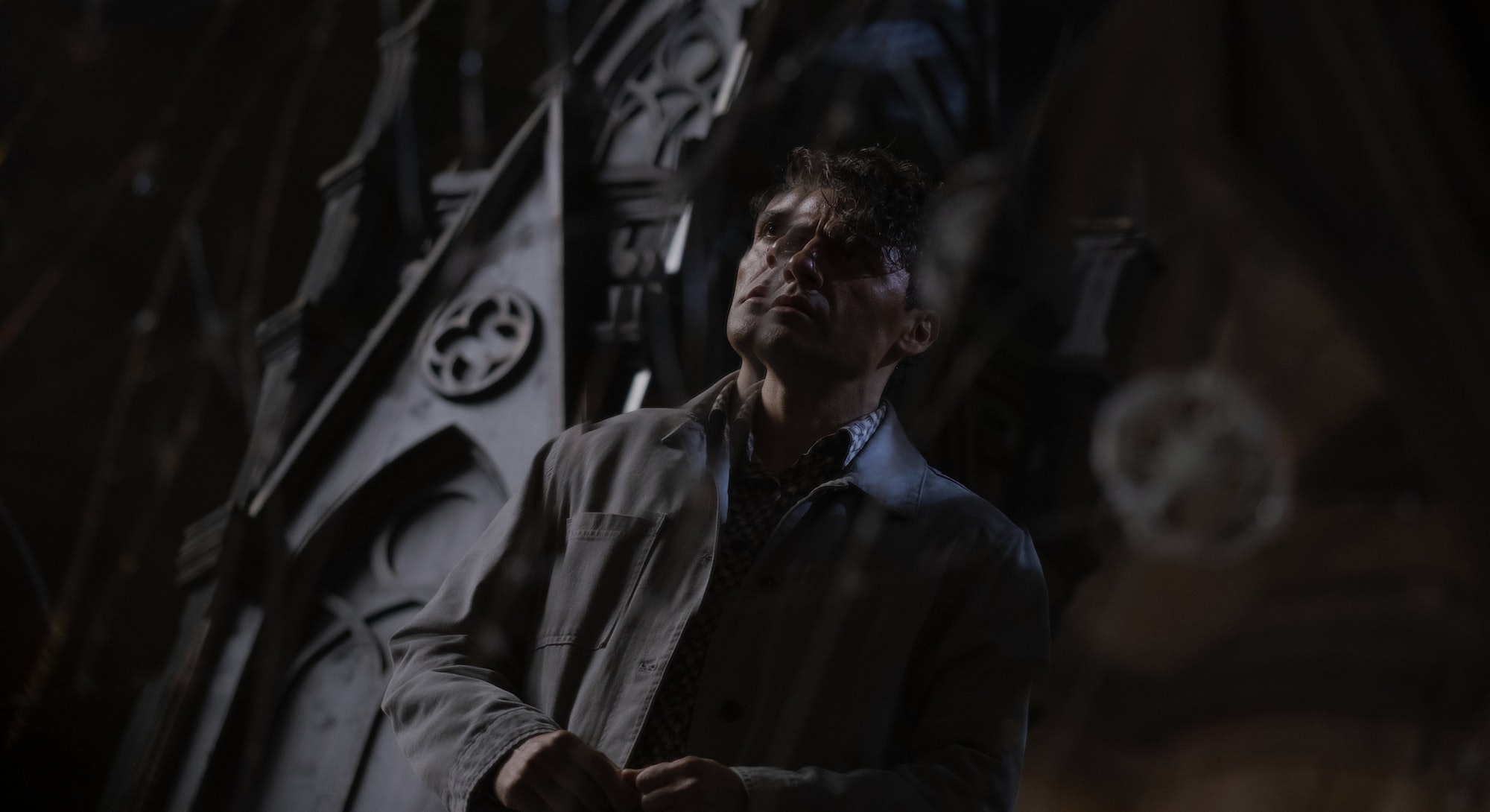 It takes a full hour for the true protagonist of Moon Knight to reveal himself.

At the very end of the show’s premiere, and with a giant CGI jackal bearing down on him, Oscar Isaac’s meek gift shop attendant Steven Grant finally realizes there’s something — and someone — more to him than they’d previously believed. In a twist ending, the audience and Grant both meet Marc Spector at the same time.

According to Moon Knight’s executive producer Grant Curtis, this was always head writer Jeremy Slater’s plan to unravel one of Marvel’s most complex and confounding superheroes.

“From day one, what Jeremy said was, ‘I really want to put the audience in a front-row seat as we go through this character exploration with Steven Grant, and with Marc Spector,’” Curtis tells Inverse. “As the layers are being peeled back, they’re going to be engaged and they’re going to be very emotionally connected from frame one.”

As soon becomes clear, Moon Knight is not only the mild-mannered Grant but also Marc Spector, a former mercenary who travels the world at the service of Ancient Egyptian god Khonshu, seeking to mete out justice as he sees fit – a fact that Grant has no idea of when the series begins. Dissociative Identity Disorder, however, has long been part of the character’s comic book history.

Over the course of many decades, Marvel’s Moon Knight has gone through more iterations than most superheroes. In some stories, he’s a Batman-esque vigilante with DID. In others, he’s got superpowers and transdimensional brain damage. In bringing the character into live-action — and an interconnected cinematic universe — Marvel had to reconcile the many personas of Moon Knight’s history into one coherent identity and rewrite some crucial parts of the cult classic character. Here’s how they did it.

“You think you own this body?”

As might be expected for a character that debuted back in 1975 (as an antagonist in the horror-influenced series Werewolf by Night), Moon Knight didn’t initially have multiple personalities. He was simply a mercenary with multiple fake identities that he used in service of his missions. As one character puts it in 1976’s Marvel Spotlight #28, the first solo Moon Knight story ever published, “He takes on other identities — cabdriver, soldier-of-fortune again, and so on. Nobody knows how many identities he actually has.”

The answer to that question would turn out to be three, at least initially. Beyond Spector and Grant (who’s actually a high-society millionaire in the comics), there was also Jake Lockley, the aforementioned cab driver. (Unfortunately for Jake fans, he doesn’t show up in any of the four episodes screened to press.)

2014’s Moon Knight #1 explicitly states that Moon Knight doesn’t have DID but that his multiple personalities result from brain damage caused by being resurrected from the dead by Khonshu.

“I believe you were indeed raised from the dead by an outerterrestrial entity, and remade to some extent by that entity’s operations,” a psychologist explains in the issue. “You’re not insane. Your brain has been colonized by an ancient consciousness from beyond space-time.”

Of course, this being comics — and, specifically, this being Moon Knight — that explanation was later walked back, with the 2016 relaunch of the series suggesting that Marc Spector had shown signs of DID as a child, decades before he was brought back to life by Khonshu. The one constant in Moon Knight’s existence is that he is consistently in flux, forever changing, both behind the scenes creatively and in his stories.

“You’re in danger, but I can save us”

For any other character, this kind of inconsistency and continual reimagining and rebooting could cause problems for anyone trying to translate them into a new medium. After all, fans are looking for a version as close to their favorite take as possible, something that becomes almost impossible when the stories are so divergent from each other. What Disney+’s Moon Knight head writer Jeremy Slater and the show’s creative team manage to do is turn that drawback into a strength by leaning into the inconsistencies and making them central to the story.

“DID was one of the most important things that drew me to the story,” says Mohamed Diab, Moon Knight’s primary director. (He helms four of the show’s six episodes.) “I loved seeing the beginning of the story through Steven’s eyes.”

As the show builds out its version of Moon Knight, it picks and chooses from different comic book incarnations. Expect to see the classic version of the character alongside the more recent “Mr. Knight” take. All the while, it leans into the idea that the different versions can co-exist alongside each other because of Moon Knight’s various personalities. It’s an idea that Diab took very seriously because of the real inspiration behind it.

“I didn’t want [DID] to be a gimmick,” he says. “I imagined myself, what if I had this? What would my life be? It’s a hard thing to learn how to live with that; a lot of people really struggle with it. It’s important to say, even though we deal with DID with the utmost respect, [Moon Knight] is not an accurate depiction of it. This is [set in] a fantastic world, with superheroes in it.”

This is, ultimately, to the show’s benefit, especially as Steven and Marc continue to interact in the series. While the show doesn’t dive deeply into DID in the same way that DC’s Doom Patrol has, the outlandish dramatic possibilities offered by the Marvel of it all make the reality of DID easier to understand for newcomers.

Moon Knight both is and isn’t an origin story. It might at first be difficult for the audience to grasp such a contradiction. But keep watching because the series ultimately manages to tell the origin that’s truly important: Steven Grant discovering that he is part of a larger system of personalities and abilities, and what that means for him and all those with whom he shares a body.