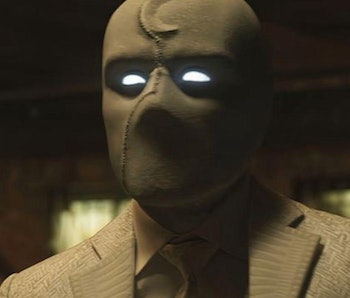 Moon Knight has a lot resting on Marc Spector’s shoulders. With no Marvel TV content since Christmas 2021’s Hawkeye, the future of the Marvel Cinematic Universe on Disney+ lies with a character completely new to the franchise. It’s quite the gamble, but Marvel seems sure the many alter egos of Marc Spector are up to the task.

But just what will these identities look like? A new poster gives us a close look at a major alter ego, and a clue as to what comics informed the plot.

In new images and a new poster, Moon Knight trades his robes and cloak for something a little more Mad Men: A luxurious three piece suit. Fans of Moon Knight will recognize this iteration of the character as Mr. Knight, a more measured alter ego of Marc Spector.

Mr. Knight is a relatively recent addition to the Moon Knight canon. Though a version of Moon Knight in a hoodless business suit appeared in 2012’s Secret Avengers #19, it took another two years for this outfit to become associated with a completely different persona.

The Mr. Knight persona made his debut in 2014’s Moon Knight #1, written by Warren Ellis. Mr. Knight was more Batman-like than Moon Knight’s brash approach, and he had long banter-y conversations with his foes.

But the comic run most likely to be the inspiration for Mr. Knight is the 2016 series written by Jeff Lemire. This storyline followed Marc Spector in an inpatient mental health facility, convinced by the staff that his Moon Knight self was nothing more than a boyhood fantasy.

This fantasy comes to life in the form of Mr. Knight, who joins forces with his fellow patients in order to fight off a group of supernatural creatures, including mummies and vampires.

The most interesting part about these comic runs is they both heavily feature the god Khonshu. Khonshu is a complex figure in the Moon Knight comics, but it looks like MCU fans will get to know him well, as a split-second shot in the trailer shows Khonshu in all his weird skeletal-bird glory. Does the Mr. Knight appearance mean we’ll get more Khonshu?

If there’s one thing this close up on Mr. Knight definitely reveals, it’s that we’re not just dealing with a Jekyll and Hyde story. Moon Knight could include all sorts of identities, fighting for dominance as they fight evil together.