Batman vs. Moon Knight: Who wins the DC/Marvel battle for the ages? 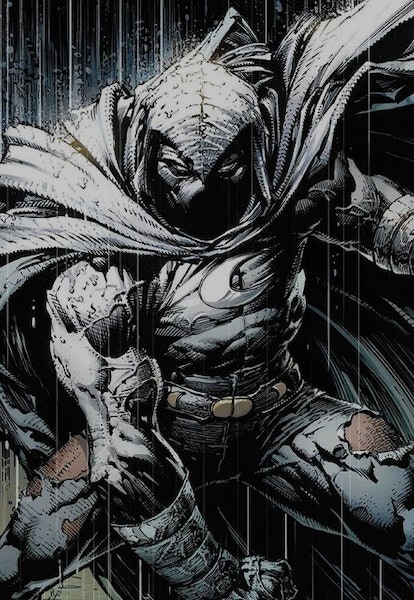 A watchful protector walks down a dark chamber and meets the protector of night travelers.

No, this isn’t the beginning of some off-color joke. It’s a showdown between the Dark Knight and the Moon’s Knight.

Marvel’s Moon Knight has long been compared to DC’s Batman, with a number of folks unfamiliar with Marvel’s cult-hero believing him to be a mere rip-off. It’s understandable why one might think that, especially in terms of surface-level descriptions. Both Bruce Wayne and Mark Spector traveled the world, acquiring an unlimited number of skills. And they both hide their vigilante personas behind wealthy playboy aliases. And of course, there’s the whole vengeance aspect, with both characters being brooding vigilantes who work at night and use boomerang-inspired weapons. Oh, and that’s saying nothing of the fact they’re barely keeping their mental health in order due to past trauma.

Ok, so I haven’t really made a great case that they’re all that different from each other. But trust me, for all the similarities, there are just as many differences. Let’s get into it.

IN THE BLACK CORNER: Batman

Batman first appeared in DC Comics’ 1939 comic Detective Comics #27. Is there really anything more to say about Batman that we all don’t already know? From the tragic murder of his parents to his unmatched intellect and resources, Batman is the most any superhero can aspire to achieve without superpowers.

For the sake of keeping things fresh for this fight, I do want to zero in on Matt Reeves and Robert Pattinson’s depiction in The Batman, which goes a long way in exploring Bruce Wayne’s damaged psyche and family history of mental illness through his mother, Martha Arkham. This iteration of Wayne hasn’t been diagnosed as far we know, so it’s unclear what he’s dealing with specifically. But Reeves did mention Darwyn Cooke’s Batman: Ego as a significant source of inspiration for The Batman, and within that story, Batman isn’t just a costume, but a whole separate entity that he argues with and attempts to keep at bay for the sake of not breaking his “no kill” rule.

There’s also a supernatural side to Batman’s existence as well, something explored in the comics of Peter Milligan, Grant Morrison, and Scott Snyder, through the existence of the bat-demon Barbatos that has sought to use Batman as his host and destroy him. In fact, Barbatos may have orchestrated the circumstances for the murder of Thomas and Martha Wayne, corrupting Gotham while he lay dormant in the city’s bowels since its construction.

IN THE WHITE CORNER: Moon Knight

Moon Knight first appeared in Marvel Comics’ 1975 comic Werewolf by Night #32. A former Mercenary who was left for dead by his former employer, Marc Spector was resurrected by the Egyptian god of the Moon, Khonshou. Striving to atone for his sins and fulfill the role placed on his shoulders, Spector not only reinvented himself as Moon Knight but also adopted two civilian aliases, the street-wise Jake Lockley and the wealthy art dealer Steven Grant. But Grant and Lockley weren’t mere alias, they were full alternate identities, a result of Marc’s dissociative identity disorder that he developed as a child and sought to hide from his rabbi father.

Over the years, even the existence of Khonshu, whose voice guides and sometimes antagonizes Marc, is called into question. Did Marc ever really die? Is he acting the Moon’s avatar? Or is it this all just another identity Marc built to try to make sense of his world and make up for the sins of his past? The answers have varied over the years. The character has inconsistently possessed powers of strength and agility that have waxed and waned with the Moon, but even that could be in Moon Knight’s head.

While Moon Knight may have difficulty sorting through his reality, he has none when it comes to taking down criminals. While he doesn’t usually kill, Moon Knight has no hard rule about it, and even if he’s not killing, his methods are particularly brutal, leaving behind a trail of maimed and disfigured bodies in his wake.

He’s no genius, but he’s skilled with just about every weapon known to man. Moon Knight is not only dealing with dissociative identity disorder, he’s also a sadist, a fact that he tries to keep at bay despite Khonshu’s frequent urgings for bloodshed that echo in his head.

Now, let’s get ready to rumble.

In a desert tomb, Batman finally finds what he’s been looking for: the last of Ra’s Al Ghul’s Lazarus Pits, the secret to his immortality. He could end it all right now. The possibility of his nemesis, Ra’s Al Ghul, father of his beloved Talia, grandfather of his son, Damian, ever returning could be put to rest right here, and countless lives could be saved. But he hesitates, wondering if the pits substance might be the very thing that could save the world. Batman has contingencies upon contingencies, but still never enough to rest easy. He holds the chemical solution he devised to nullify the green liquid in the pool, but he doesn’t pour it in.

While Batman contemplates the question as the sun lowers and the desert cools, a white-cloaked figure drops almost silently into the tomb. If it had been anyone else other than Batman, Moon Knight would have made it in unnoticed, but he was out of luck tonight. His focus wasn’t on the cowled crusader, only the pit of green liquid before him. He’d heard rumors, of course, but he never actually believed until now. Marc Spector finally has a chance to free himself of Khonshu’s demands for blood sacrifices, something the Moon god held over his head with his morality. If Khonshu could resurrect Marc, then he can strike Marc down — but not if he had the power of Lazarus.

“Who are you?” Batman asks, turning, his hand moving quickly to his utility belt for a Batarang.

“Just a ghost,” Moon Knight says, reaching for the moon darts at his own belt.

“One of Ra’s men? A member of the League of Shadows?” Batman asks, studying the figure in front of him, trying to ignore the voice in his head telling him to strike first.

“Yeah…I don’t know what you mean, pal. But I’m gonna need you to step away from that pit.”

Both combatants throw their weapons. The Batarang and the Moon dart collide. The two men run towards each other and collide as gauntlet meets gauntlet and blood is spilled in a flurry of black and white capes. Batman fights hard, but Moon Knight fights dirty. Batman doesn’t give. After all, he’s fought worse, but he hasn’t seen this kind of raw power — blows meant to cause permanent damage and not just incapacitate — since his fight against Bane.

Moon Knight’s costume is stained with red as the two continue to trade punches and kicks. Something splinters and he’s not sure if it was in his body or the man in black across from him. He hears the voices in his head. Lockley is telling him to give him a shot, while Grant suggests they try to reason with the man. Spector gives way to Lockley.

Batman notices his adversary’s fighting style has changed. It’s no less brutal, but there’s no art to it. It’s street fighting. He feels his eye begin to swell shut under his mask. How easy, he thinks, it would be to just give myself over the Lazarus Pit. But he can’t face the unnatural side effects, the madness that comes with it. So instead, he prays. He prays he’ll make it out of this tomb alive, and something in the dark hears him.

Moon Knight’s knee gives way. He collapses. He knows the man in black won’t kill him, but he also knows he’s too maimed to fight on. And if he loses, he’ll lose his chance at freedom and life. So Moon Knight does the unthinkable and calls on Khonshu’s aid for one last time.

In the light of the Moon, a form takes shape in the tomb, a figure in a suit with a skeletal bird head. This is Khonshu. While from the Lazarus Pit, a demon with features like a bat and eyes like the sun emerges. Moon Knight and Batman both fall unconscious having given themselves over to their gods. Khonshu possesses Moon Knight’s body with Barbatos takes Batman’s. No longer a battle of men, this is a battle of gods.

BATMAN VS. MOON KNIGHT: THE VERDICT

The fight last centuries and by the time it’s done, what once was a tomb is now more grains of sand upon the endless heaps of the desert sands. The bodies of Moon Knight and Batman lie on the Earth, skeletons, respectively identifiable by the few strips of white and black armor on their bodies. While both gods have suffered the consequences, Barbatos is merely a nocturnal element while Khonshu is the night itself. Khonshou devours Barbatos and walks across the sand, leaving no trace of footprints, in search of a new knight to call his own.

The Inversus winner is… Moon Knight by way of his god.