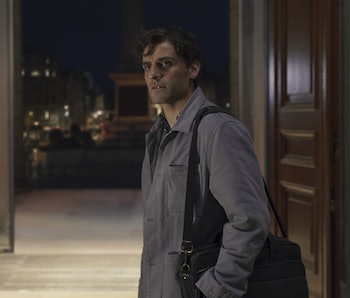 Who is Steven Grant, really?

But as Moon Knight teases in its third episode, there’s another identity who lurks within Marc/Steven, and he may be even more violent and ruthless.

Who is the third man? As always, the original Moon Knight comics provide a clue.

In the earliest Moon Knight comics, written by Doug Moench with art by Don Perlin, Moon Knight’s “multiple personalities” were less of a direct depiction of dissociative identity disorder (DID) than they were gadgets in the proverbial utility belt. The real identity of Moon Knight was Marc Spector, who came up with other identities to infiltrate different aspects of society on his superhero missions.

To rub elbows with the rich and powerful, Marc donned the identity of Steven Grant, a suave millionaire. For the seedier underbelly, Marc went by Jake Lockley, a newsboy cap-wearing cab driver.

For most of Moon Knight’s comic book history, these alternate identities were just cover stories for Marc to operate as a superhero. Only once or twice did comic book writers flirt with Marc’s personalities being indicative of a more serious problem, and almost always it was chalked up to the supernatural nature of Marc’s powers.

But in the 2000s, things changed. Writer Brian Michael Bendis, who introduced the alternate “Ultimate Universe” Moon Knight in Ultimate Spider-Man, canonized Moon Knight’s egos as an actual case of DID. This trait soon found its way to the mainstream Marvel Universe.

Moon Knight suddenly became a hero who was always unsure of his identity, and even the factuality, of his powers. There’s still a lingering possibility Marc Spector may not be the avatar of Khonshu at all. This is when Moon Knight became a de facto figure for DID and mental illness in mainstream superhero comics, albeit an imperfect one that tends to traffic in harmful stereotypes.

“Forget it Jake, it’s the MCU”

In the Disney+ series, which diverges heavily from comics canon but does take several cues from the post-Ultimate era, Steven Grant is now a bookish gift shop employee. He abhors bloodshed, and is far from the confident playboy Marc’s Steven Grant identity is in the comics.

But when Steven finds out about Marc Spector and Khonshu, a conflict for control over his body begins. And in episode three, it’s teased that neither Steven nor Marc were in control for a particularly bloody encounter.

As the end credits of Moon Knight visually imply with three images of Steven’s face, there might be a third personality. And that personality almost certainly has to be Jake Lockley.

Exactly what kind of personality Jake Lockley will be is unknown for now. Moon Knight has already diverted from the comics by changing Steven Grant from an American millionaire to an English nobody grinding out a minimum wage job. Marc Spector seems to be more or less the same, although the show hasn’t explored Marc’s story enough beyond his crumbling marriage to Layla (May Calamawy) to encourage any significant comparisons.

Just as it has Steve Grant and Marc Spector, it’s a sure bet that Moon Knight will change Jake Lockley, too. There’s already evidence that Jake may be the most unhinged personality of the three, one who finds glee in taking lives. He might even have another accent.

With Moon Knight, the MCU again makes a sharp left turn from how a character originally appeared in the comics. Shang-Chi hardly resembles his original comic book counterpart, and now Moon Knight is in the same position. But if there’s one thing Moon Knight has carried over from the comics, it’s that you can’t always trust which Moon Knight is staring back in the mirror.