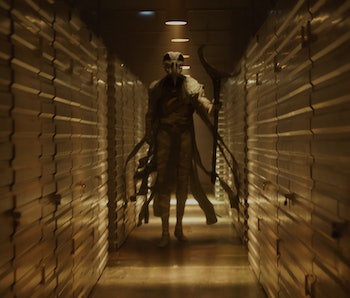 The first episode of Moon Knight doesn’t do much to tell you the Disney+ show is set in the Marvel Cinematic Universe. In fact, the Moon Knight premiere almost seems to go out of its way to avoid dropping any of the kind of MCU Easter eggs and references that comic book fans have come to expect from Marvel’s Disney+ titles. But that doesn’t mean Moon Knight isn’t critical to the MCU’s future.

The show’s first episode introduces not only Oscar Isaac’s Marc Spector (and his alternate personality, Steven Grant) but also Khonshu, the powerful Egyptian god who has chosen Marc to be his Earthly avatar. While his presence in Moon Knight Episode 1 is pretty limited, Khonshu is a powerful figure for Marvel to introduce on-screen, someone who has an exciting history in the comics with none other than the MCU’s new central villain.

A Force to be Reckoned With — Moon Knight sticks fairly close to its source material when it comes to its depiction of Khonshu. In the comics, much like he is in Moon Knight, Khonshu is a god who has used his powers for centuries to imbue his chosen avatars with special abilities. However, Moon Knight doesn’t reveal that Khonshu’s immortal presence on Earth has resulted in him and many of his Moon Knights crossing paths throughout time with Kang the Conqueror.

The latter Marvel Comics villain is defined by his ability to travel throughout time. In the comics, Kang’s various time-traveling conquests have seen him journey into both the far future and the ancient past, and he’s even assumed the identity of an Egyptian pharaoh named Rama-Tut at one point. Unfortunately for him, Kang has often had his plans thwarted by Khonshu.

Khonshu’s Past — For all his many faults, Khonshu doesn’t have much patience for Kang in the comics. When Kang has shown up on Earth at different points throughout history, Khonshu has often been there to try and stop the time traveler from accomplishing his goals.

In the comics, that has sometimes taken the form of Khonshu commanding his Moon Knights to go into battle with Kang. Indeed, Moon Knights from multiple different eras, including 4000 B.C., have all been called upon by their assigned deity to try and fight Kang. One time, when that didn’t work, Khonshu even pulled Marc Spector back in time to try and help his previous avatars in their anti-Kang efforts.

Thankfully, Khonshu and his avatars have frequently succeeded in stopping Kang’s various plans. Therefore, by introducing Khonshu in Moon Knight Episode 1, Marvel has brought a character into the MCU who may not only have extensive knowledge of Kang and his time-traveling methods but may also be well-versed in combating him.

The Inverse Analysis — Very little is known about how Marvel intends to connect Moon Knight to the rest of the MCU. However, the consensus seems to be that Marvel doesn’t plan on saying goodbye to Oscar Isaac’s Marc Spector anytime soon, which means the potential is there for him to one day join the Avengers or show up in a future Midnight Sons-led film or TV show.

Either way, there’s reason to believe Marc and his cranky deity may play even more prominent roles in stopping Kang’s inevitable multiversal conquest than fans think.

More like this
Entertainment
13 hours ago
Quantumania Writer Hints at What Makes Kang Much More “Dangerous” Than Thanos
By Eric Francisco
Entertainment
Jan. 25, 2023
The MCU could bring back a hero from its most underrated TV show
By Dais Johnston
Entertainment
Feb. 3, 2023
Marvel just revived its primate assassin — What to know about Hit-Monkey
By Mónica Marie Zorrilla
LEARN SOMETHING NEW EVERY DAY.
Related Tags
Share: