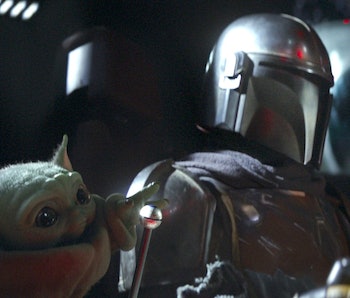 Prior to his death and subsequent resurrection, Emperor Sheev Palpatine was toiling away behind the scenes, working to become immortal and rule the galaxy. We already suspected that the Empire's obsession with Baby Yoda in The Mandalorian could be connected to Palp's obsession with immortality, and an old episode of Star Wars: The Clone Wars might just confirm it.

If this clever new fan theory is correct, then a forgotten Clone Wars plotline could explain Palpatine's evil plan in The Mandalorian Season 2.

Speculative spoilers ahead for The Mandalorian Season 2.

In The Clone Wars Season 2 episode, “Children of the Force,” it was revealed that the Emperor was kidnapping Force-sensitive children to experiment on. In short, Palpatine was performing a surgical procedure, called "surgical slave conditioning," that would render the children submissive to any and all of Palps’ Dark side commands.

Palpatine was even warned that the surgery could kill the kids, but he went ahead and did it anyway.

Fast forward to Season 1 of The Mandalorian. In the episode “Chapter Three: The Sin,” Din Djarin takes The Child (aka, Baby Yoda) to the Client (Werner Herzog), though what this man has in store for the adorable green creature is a mystery. Mando, ruffled by the fact that no one would give him answers about their plans for Baby Yoda, changes his mind and decides to go back and save him. Before rescuing him, he briefly overhears the Herzog discussing an experiment that could potentially kill The Child.

Reddit user StarsFan93 made an inspired connection between the two Star Wars series, suggesting that the experiment Palpatine was forcing children to undergo was the very same one the Client was referring to in The Mandalorian. With that in mind, it’s possible that Season 2 of the Disney+ show will further explore the intent behind this Dark side procedure.

We know Baby Yoda is Force-sensitive and it seems every bounty hunter in the galaxy is after him. Not to mention the Client was loyal to the Galactic Empire and, by extension, Palpatine. It’s possible the Client was simply following through on Palps’ original plan to kidnap Force-sensitive children and brainwash them.

Multiple fan theories have already speculated that Baby Yoda’s Force abilities will factor heavily into the storyline. One theory even suggested that Palpatine’s goons were after the character because he had a healthy amount of midi-chlorians — microscopic life forms that allow Force-sensitive people to manifest unique abilities.

Perhaps the Empire wanted to experiment on Baby Yoda to acquire his midi-chlorians for the cloning process, the same one that ultimately revived Palpatine in The Rise of Skywalker. Whatever the case may be, this Clone Wars episode sets a precedent for this experiment to show up again soon in The Mandalorian Season 2.

The Mandalorian Season 2 is scheduled to premiere in October on Disney+.