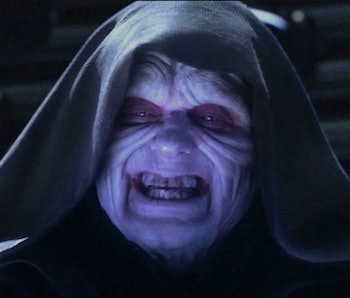 For months, fan theories have tried to make sense of Emperor Palpatine’s return in The Rise of Skywalker. Was he secretly Supreme Leader Snoke all along? Did he use Essence Transfer to possess people or objects? Now that the movie is finally here, we still don’t know. A thoughtful new theory offers a more satisfying take on Palpatine’s resurrection.

Warning! Major spoilers for Star Wars: The Rise of Skywalker ahead.

In the opening crawl of The Rise of Skywalker, Palpatine is revealed to be alive and well, broadcasting his return to the galaxy as evil villains are wont to do. Convinced Palpatine would threaten his leadership of the First Order, Kylo Ren travels to Exegol to kill him, and asks the former emperor how he survived.

Sheev explains his return as a product of the Dark side’s supernatural abilities, but leaves it at that. Specifically, he says “the Dark side of the force is a pathway to many abilities some consider to be unnatural.” He said the same thing to Anakin Skywalker in the oft-referenced opera scene in Revenge of the Sith.

While it still doesn’t confirm how Palps was able to return, it’s implied that he either willed himself back to life as Darth Plagueis taught him to do, or that the Sith are barred from the Force “afterlife” and becoming ghosts like Luke, Yoda and Obi-Wan. This would mean Palpatine’s consciousness was left behind at the end of Return of the Jedi.

Reddit user ESS83 theorizes that Palpatine’s return may have stemmed from the teachings of Jedi Master Qui-Gon Jinn. In The Clone Wars, Qui-Gon teaches Yoda how to become a Force ghost after death. Yoda likely teaches Luke and so on. The theory implies Palps was also studying Qui-Gon’s ideas, though for different reasons.

Becoming a Force ghost allows Jedi to become immortal and merge with the Force all at once. That’s how they cheat death. By contrast, Palpatine “was so corrupted from the Dark side, that instead of becoming one with the Force, he was basically just a mutilated, talking corpse,” writes the theorist.

This Dark side corruption is likely how Palps survived his fatal fall in Return of the Jedi. He couldn’t merge with the Force because he was bound to his human vessel, which is probably what he wanted anyway.

In any case, Palpatine’s repetition of the famous Revenge of the Sith line regarding the Dark side’s “unnatural” tendencies is the crux of the explanation he gives Kylo. So while Palps’ resurrection will always remain murky and likely a point of contention, this theory gives fans something more concrete to contemplate.

Star Wars: The Rise of Skywalker is now playing in theaters.