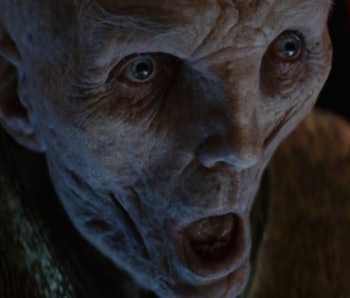 Amid the recent news about Star Wars: The Rise of Skywalker, discussion surrounding Supreme Leader Snoke has waned. The former First Order leader died at the hands of Kylo Ren in The Last Jedi, but fan speculation has managed to keep Snoke alive long past his death. During a recent interview, J.J. Abrams teased Episode IX may reveal more details about Snoke’s past, including a possible Palpatine connection. Let’s dissect.

In an interview with Uproxx, Abrams was asked whether The Rise of Skywalker would expand on Snoke’s backstory. Abrams dodged the question, saying Episode IX “needed to provide answers,” but that not everything would be “entirely demystified by the end.”

While Abrams neither confirms nor denies Snoke’s involvement, it leads us to believe that his past will factor into the film. It’s possible Snoke will be revealed as a former ally of Palpatine’s, and even a brief line confirming they knew of one another would go a long way to explain his mysterious origins. With that in mind, here are three theories that could work to offer more Snoke insight in The Rise of Skywalker:

You’ve probably heard this one. Numerous fans have speculated that Palpatine used Snoke as a host body. A few months ago, a theory surfaced suggesting Palps used an Essence Transfer, which is basically a Dark side Force power that allowed his consciousness to move to another body. This is backed up by the fact that Palpatine’s theme plays while Snoke tortures Rey in The Last Jedi. Make of that what you will.

In the comic book Star Wars: Age of Resistance - Supreme Leader Snoke, Snoke trains Kylo Ren in the Force, though he doesn’t seem thrilled about working with him. (He’d much have preferred training with Luke Skywalker, actually.) Previously, a Making Star Wars leak suggested Kylo would do Palps’ bidding to attain more power.

There’s also that widely circulated leak about Palpatine potentially using Rey and Kylo to siphon Force energy. How does that connect Snoke’s past to Episode IX? It’s possible that Palpatine tasked Snoke with training Kylo and pushing him further toward the Dark side.

1. Supreme Leader Snoke was a clone

Snoke being a damaged clone of Palps is one of the most popular theories circulating among the fandom. From an exchange between General Hux and Kylo Ren in The Force Awakens, we know clone technology is still in play. At one point, Kylo snipes at his rival by saying “Leader Snoke should consider using a clone army” to avoid Hux’s ineptitude.

It’s possible that Palpatine planned ahead for his potential demise in in Return of the Jedi and cloned himself several times. Snoke may have been the first imperfect clone, which would explained his scarred appearance in The Last Jedi.