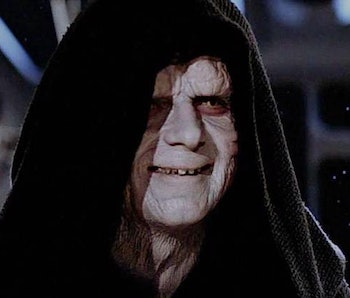 Kylo Ren has been busy in the period of time between Star Wars: The Last Jedi and the upcoming Star Wars: The Rise of Skywalker. After killing Snoke, Kylo’s leading the First Order. Call him by his new name: Supreme Leader Kylo Ren. With the Knights of Ren presumably doing his bidding as well, Kylo’s got it made with lots of power and minions at his disposal. But a new Episode IX preview may reveal Kylo’s ultimate plan and why he goes in search of Emperor Palpatine to begin with.

A previous leak from Making Star Wars surmised that Kylo Ren would happen upon Emperor Palpatine early on in Episode IX. The gist of it was that Kylo had been in search of Supreme Leader Snoke’s power source and, with the use of the elusive “wayfinder” device, winds up finding Palps instead. Could he have been after the same dark secrets of the Force? A preview from Star Wars Insider might clue us in.

In the spread teasing each Star Wars character’s role in The Rise of Skywalker comes an intriguing description of Kylo’s potential plot. We already know that he is the new supreme leader of the First Order, sure, but the part about him wanting even more power might hint at a bigger connection to Palpatine than we previously thought.

Here’s what the description says:

“Hungry for even more [power], Ren scours the galaxy for the darkest secrets of the Force in his quest for ultimate supremacy.”

Maybe we’ve been looking at Kylo’s meet-up with Palpatine all wrong. Perhaps they don’t cross paths by accident, but because it’s Palps who holds the “darkest secrets of the Force” and Kylo knows it, which is why he goes in search of the former emperor. That’s confusing given that Kylo’s supposed to fight Palpatine in the final act of the film and all, but finding Palpatine to gain more power doesn’t negate the reasons for their battle later on. In fact, that could be the reason why they fight to begin with.

In addition to all that, an older leak revealed that Kylo would also do the former emperor’s bidding. Why? Because dear old Palps promised Kylo that he could have complete control of the galaxy and rule it with Rey by his side.

That definitely fits in with this description of Kylo scouring the galaxy, right? It’s possible that Kylo wants to amass the same amount of Force power and influence Palpatine used to have at the height of his galactic rule and that’s why he goes in search of him.

Of course, Kylo could very well be looking for Palps to kill him and not for answers. After all, if Ben Solo wants to reign supreme, then killing Snoke was only the first step in attaining galactic control if Kylo sees Palpatine as a threat as well. Either way, Kylo is on a power trip and if he thinks there won’t be consequences to his actions, then he’s got another thing coming.