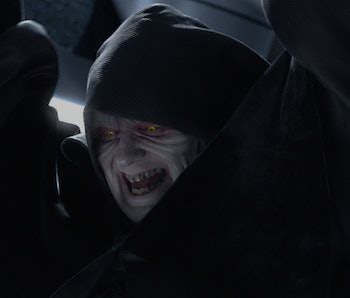 The Death Star was the Galactic Empire’s ultimate weapon of mass destruction. It did exactly what its name implied and had the capacity to blow up whole planets. In fact, the Death Star was so powerful that Emperor Palpatine had it built not once, but twice (three times if you count Starkiller Base in The Force Awakens). Now, with the Death Star set to return in Star Wars: The Rise of Skywalker, a mind-blowing new theory offering a fresh take to why Palpatine actually built the Death Star and how it might connect to his true plans in Episode IX

Warning! Speculative spoilers for Star Wars: The Rise of Skywalker below.

The latest Star Wars: The Rise of Skywalker trailer may have confirmed Palpatine’s return, but does that mean the Death Star might also be making a comeback? Let’s backtrack a bit. Over on Reddit, user EnterSaint theorized that the Death Star may have been built as a ruse to hide an entirely different set of plans.

Eager to explore the origins of the Force, Palpatine might have orchestrated the construction of the Death Star as a way to reach the unknown regions of the galaxy and access its full power. Basically, Palps never intended to stick around to rule the empire and used the Clone Wars and the Rebellion’s attempts to fight back as an excuse to spend an inordinate amount of money building his flying space fortress.

Still with me? Good. Additionally, in the Darth Vader: Dark Lord of the Sith comic books, Palpatine stated his intention to explore the unknown regions. Perhaps that’s why the original Death Star utilized kyber crystals — the same crystals found in every lightsaber.

As elements with mystical powers, “Palpatine could have in mind some sort of bridge between the mystical and the mundane, to harness the actual source of the Force,” the theorist writes.

So, how does this all connect back to The Rise of Skywalker? Well, we know that Palpatine is returning and that he might have a Sith trooper army on standby. However, if recent leaks prove true, then his ultimate goal is to use Kylo Ren and Rey’s powerful connection to siphon Force energy and rejuvenate himself.

It’s possible Palpatine no longer needs the Death Star to locate the Force’s source because he’s found its secrets buried within Kylo and Rey’s bond and that’s why he wants them in the same room together. They could be exactly what he needs to access the unknown region.

In other words, Palps won’t need to build a third Death Star if Kylo and Rey work as a gateway to what he’s wanted all along. And if he did manage to trick everyone into thinking he only wanted to blindly destroy planets, then The Rise of Skywalker may prove Palps as the ultimate manipulator.