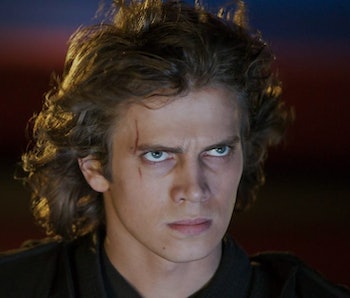 Rumors are swirling that Star Wars: The Rise of Skywalker could bring back the character that started it all. The Chosen One. The master podracer. Anakin Skywalker. Various efforts to keep Star Wars prequels actor Hayden Christensen out of the spotlight are only fueling those efforts, but before we celebrate the return of the original emo Force-user, it’s worth asking: Does a Hayden Christensen cameo in Episode IX even make sense?

The short answer is: no. Bringing the Star Wars prequel-era actor back into the Star Wars galaxy only makes sense if you’re giving in to George Lucas’ worst instincts. To really explain, we’re going to have to dive a little deeper into recent Rise of Skywalker leaks. So consider yourself warned: There are spoilers just below this screenshot of Hayden Christensen in the digitally altered re-release of Return of the Jedi.

First, a bit of background. We’ve been predicting that Anakin’s Force ghost could show up in The Rise of Skywalker in one form or another for a while now, whether that’s as a fun-loving Jedi or the evil Darth Vader. More recently, those theories got a big boost when veteran Hollywood reporter Roger Friedman reported that the actor would return in Episode IX:

The word is he will appear as a Force ghost, just as Yoda returned in The Last Jedi. Christensen is said to have filmed his scenes last year.

On top of that, Disney seems to be managing the narrative around Hayden Christensen extremely carefully. Photos of the actor enjoying the Galaxy’s Edge theme park were recently deleted from the Disneyland Twitter only to be reposted after fans noticed their disappearance. Earlier reports also claimed that a panel feature Christensen and Ian McDiarmid (Emperor Palpatine) was mysteriously canceled at the last minute.

So what is Disney hiding? The obvious guess is that Christensen will reprise his role as a Force ghost. However, before you get too excited, we have to point out that the actor’s appearance in The Rise of Skywalker makes absolutely no sense.

Think about it. Based on everything we know about Force ghosts, Anakin’s Force ghost shouldn’t look anything like Hayden Christensen. The only reason we’ve been trained the expect this is because George Lucas egregiously went back and edited the end of Return of the Jedi to show Christensen as a Force ghost instead of the version portrayed by Sebastian Shaw. And that was just one of many terrible changes Lucas made to the original trilogy to the point where it’s now nearly impossible to get your hands on the original version.

Of course, you could argue that Anakin actually died back in Episode III when he turned to the Dark side and became Darth Vader, but that’s a pretty weak argument. It also undermines our broader understanding of the Force as something objective that only cares about balance, not good or evil. If that’s how the Force works, then there’s no ideal version of Anakin Skywalker, there’s just the one that exists at any given moment to best balance the never-ending battle between Light and Dark.

But putting all this in-universe theorizing aside, jamming Hayden Christensen into The Rise of Skywalker just feels wrong. It would undercut the broader story these nine movies have told to instead appease a smaller fanbase that’s convinced the prequels are actually good (they’re not).

Then again, considering that George Lucas has had some direct input on The Rise of Skywalker, maybe we should expect a bit of his influence on this movie. It’s almost as if he’s digitally altering Episode IX in real time, editing in unwanted cameos and CGI monstrosities.

We’ll have to wait and see what really happens, but all signs seem to be pointing to a conclusion to the Skywalker Saga that’s a lot closer to the prequels than we hoped.