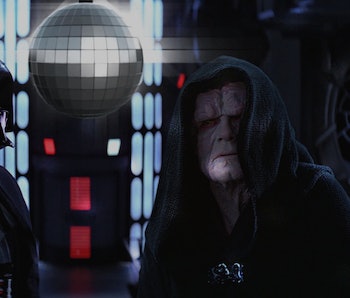 If the rumors are true, Star Wars: The Rise of Skywalker will be jam-packed with Force ghosts as an entire saga’s worth of dead Jedi pitch in to defeat Emperor Palpatine. Now, a new leak could reveal the ghostly return of another long-dead Force user whose role in Episode IX has been shrouded in mystery.

The latest The Rise of Skywalker leaks come from veteran entertainment journalist Roger Friedman, who reported the news via his website Showbiz411. He reveals that Star Wars prequels star Hayden Christensen will reprise his role as Anakin Skywalker/Darth Vader, though it’s unclear which side of that duality he’ll be playing.

Here are the key lines from Friedman’s story:

The word is he will appear as a Force ghost, just as Yoda returned in The Last Jedi. Christensen is said to have filmed his scenes last year.

We’ve predicted before that Vader could return in some capacity, and it makes a lot of sense since he’s technically the most important character in the entire Skywalker saga. However, this might be the closest thing we have to confirmation so far. And, as fans on Reddit were quick to point out, Friedman is likely drawing from Hollywood sources he’s built up over his career, giving the leak a bit more credibility.

Christensen’s exact role in the movie is still up for debate. Obviously, he returned to the Light side at the end of Episode VI, so it’s possible the Force ghost we see in Episode IX could be the same one Luke sees in the final scene of Return of the Jedi. Then again, with Emperor Palpatine making a comeback, it’s possible Vader could be drawn back to his old Sith master and the Dark side of the Force instead.

Finally, Friedman caps off his report with another bombshell:

There is also strong possibility we’ll see Harrison Ford as Han Solo one last time. Remember, I told you this. Knowing JJ, there’s quite possibly a final shot of Han, Luke, and Leia to make the audience burst into tears. So stand by.

If Harrison Ford also returns in Episode IX, this could be one hell of a family reunion. But with The Rise of Skywalker set to cap off not just the sequels trilogy but the entire Skywalker saga, it’s no surprise that Lucasfilm and J.J. Abrams will be pulling out all the stops.

The return of Han Solo could also give the beloved character a chance to finally say goodbye to his old friend Luke. Mark Hamill himself noted that this bit of closure was missing from The Force Awakens, but maybe The Rise of Skywalker can finally give fans the tear-filled farewell they want.