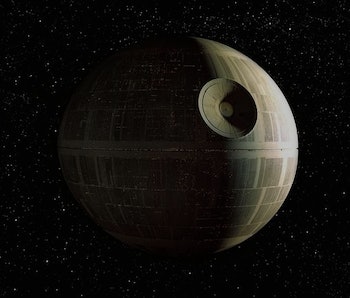 The ability to destroy a planet may be insignificant next to the power of the Force, but that hasn’t stopped the planet-killing Death Star from playing a role in the vast majority of Star Wars movies. With Star Wars: The Rise of Skywalker less than six months away, it looks like the Death Star is back. Here’s a very brief history of how much the Death Star matters to Star Wars movies and seven possible ways some version of the evil ball of doom could return.

Spoilers for all Star Wars movies, except for the The Rise of Skywalker, which we’re just speculating about here.

After The Rise of Skywalker hits theaters this December, there will be 11 legit canonical Star Wars movies in the epic saga, and guess what? Of those 11 films, a staggering 9 Star Wars movies either feature a Death Star outright or depict and mention a version of the Death Star in some way, shape or form. Only The Phantom Menace and Solo managing to wriggle off the Death Star hook. As for the other films: We see a Death Star hologram in Attack of the Clones, witness its early construction in Revenge of the Sith, see its completion Rogue One, cheer for its destruction in A New Hope, hear the Emperor talking about said destruction in The Empire Strikes Back, scratch our heads as the Rebels takedown a half-completed Death Star in Return of the Jedi, shrug our shoulders at Starkiller Base (which also features several mentions and one hologram of the Death Star) in The Force Awakens, and finally, in a movie that shouldn’t have any Death Star references — The Last Jedi — Finn informs us that the big laser on Crait, is, in fact, “Death Star tech.”

Now, based on footage in the trailer for The Rise of Skywalker, the final film in the epic Skywalker saga does in fact have some kind of Death Star in it. Should this be called the Skywalker saga? Maybe we should consider all Star Wars movies up to this point “the Death Star saga.”

Here’s the shot in the first Rise of Skywalker trailer that pretty much solidifies some version of the Death Star is back. But how? Here are the options, ranked from least likely to most likely.

7. That’s Not the Death Star

The idea here is that they are being deceived by some kind of Dark Side of the Force trick. This is a little like wondering what would happen in Kylo Ren or the ghost of Palpatine somehow borrowed the Reality Stone from Thanos in Avengers: Infinity War. I mean, if Luke can make Kylo Ren think he’s on the planet Crait, when he’s really not, what’s to stop Palpatine making Rey and her buddies hallucinate an entire Death Star?

One explanation for the Death Star “wreckage” is that its literally only one piece of a puzzle that consists of multiple Death Stars. It’s possible this Death Star isn’t the only Death Star in the new movie, but just one of many that are either being constructed or, as seems pretty obvious, reconstructed.

5. The Wreckage in the Trailer Is a Different Death Star Than the Ones We Know, That Is Also Old

The Death Star we see in the trailer might be an old Death Star, but that doesn’t mean its wreckage from one of the two Death Stars we’ve seen. After all, three decades pass between Return of the Jedi and The Force Awakens, which means the Empire (or somebody else) could have built a third Death Star and that Death Star was disabled and fell onto this planet. So, for the audience, this Death Star would be new, but for the characters, it might be old.

In the old Star Wars expanded universe, specifically, the Kevin J. Anderson book Jedi Search, it was revealed that a Death Star prototype was built in the middle of a bunch of black holes called the Maw Installation. This Death Star didn’t really have anything but the skeleton of a sphere, and that famous giant superlaser. Rey, Finn, and Poe could be looking at something like that; an incomplete prototype of the Death Star. In this scenario, it only looks old and busted because it’s just been sitting on that planet for thirty years.

3. It’s Actually a New Death Star Built by the Rebels

On explanation that hasn’t really been floated is one of the most likely: this could just be a new Death Star that is being built in secret. Would this be exactly like the Return of the Jedi? Well, maybe. But, what if the new Death Star wasn’t being built by the bad guys, but instead, the Resistance. There are a ton of rumors suggesting an unused plotline from The Force Awakens involved Leia building a superweapon for the good guys, which is why the New Republic government cut ties with her in the first place. So, are Rey, Finn, and Poe looking at…their Death Star?

2. Pieces of the First Death Star From A New Hope Are Found on Yavin IV

After Luke Skywalker destroyed the first Death Star in the original Star Wars movie, it pretty much looks like it’s blown to bits. That extra shockwave in the special editions adds to this feeling. But, what this very prominent theory presupposes is: Maybe huge chunks of it flew down and landed on the jungle moon of Yavin IV?

The reason this theory is so plausible is mostly because it seems like it would satisfy a huge nostalgia play in the film. After all, Yavin IV is where the first Star Wars movie ended, returning there would make a lot of people happy.

1. Pieces of Second Death Star From Return of the Jedi Are Found on the Forest Moon of Endor

Same as above, only with the second Death Star and the forest moon of Endor; you know, otherwise known as “Ewok Land.” This theory presents the exact same problems as the Yavin IV theory insofar as it really looks like Lando takes out the WHOLE Death Star II in the climax of Return of the Jedi.

So, same thing as above, this theory suggests that Rise of Skywalker will retcon that a little bit and have a big chunk of that Death Star land on Endor. From a nostalgia point of view, I’m ranking this one slightly higher for one reason only. If you’re going to wrap up the entire nine-part-saga and sort of dip your cap to all of Star Wars in one movie, I think we are entitled to see some goddamn Ewoks.

Star Wars: Episode IX —Where’s My Goddamn EwoksThe Rise of Skywalker is out in theaters on December 20, 2019.