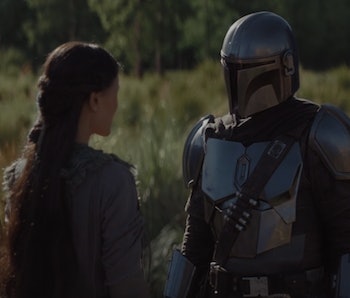 The fourth episode of The Mandalorian on Disney+ confirmed an important detail about Mando’s past, one that had been heavily implied in previous conversations with the Armorer but never confirmed outright until now: Mando wasn’t always a Mandalorian — he was adopted into their culture. This subtle but important distinction makes him more like Boba Fett and Jango Fett before him, who were also humans that wore Mandalorian armor. Mando, however, follows the Way of Mandalore in a manner the Fetts never did.

In “Sanctuary,” Mando takes Baby Yoda to the remote, sparsely populated planet of Sorgan, so they can lay low and avoid the bounty hunters’ guild and whatever post-Imperial soldiers want Baby Yoda. In an intimate adventure where he protects a small village from some Klatooinian raiders with the help of former Rebel shocktrooper Cara Dune (Gina Carano), we learn a lot more about the habits of Mandalorians — or at least Mando’s particular covert.

“Sanctuary” feels a lot like the Akira Kurosawa film Seven Samurai or the crude The Last Samurai. A restless warrior finds peace in a humble village, and contemplates retirement before violence finds him once again. Mando befriends his host, a widow named Omera, while her daughter Winta plays with Baby Yoda. Mando and Omera’s relationship quickly grows intimate.

Omera asks Mando about his helmet habits, and we we learn that Mandalorians do actually take their helmets off to eat, but it has to be in private. It’s a big surprise when we even see it happen. (But no, we don’t see his face.)

Omera asks when he last showed his face to anyone. “I wasn’t much older than they are,” Mando says, gesturing to a group of nearby kids playing. “I was happy that they took me in. My parents were killed and the Mandalorians took care of me.” She seems sad about the whole thing. “This is the Way,” is his only response.

Mando was a regular human orphaned when Super Battle Droids killed his family, and that specific Mandalorian covert took him in, so he adopted their warrior religion, which feels more devout than other Mandalorian clan cultures we’ve seen in other Star Wars shows and movies.

“When one chooses to walk the Way of the Mandalore, you are both hunter and prey,” the Armorer said in Episode 3. This happens after Paz Vizla — the Heavy Infantry Mandalorian — chastised Mando for working with the Empire to retrieve the stolen Beskar steel. There’s a class dynamic at play here: Some of these Mandalorians were born into this culture, and others merely adopted it. More “pure” Mandalorians see themselves as superior to the foundlings, so Mando has a lot to prove to people like Paz Vizla.

This Episode 3 conversation with the Armorer implies that Mandalorians never remove their helmets at all, and it’s made clear that there’s almost nothing worse than when an enemy forcibly removes a Mandalorian’s helmet. But here in Episode 4, we get confirmation that they do take their helmets off to eat. By her standards, this is all that matters to a Mandalorian. As long as you adopt and follow “The Way,” then it doesn’t matter who or what you were at birth. Mando is no less a Mandalorian than anybody else, even if he is still lacking a signet. But again, this seems like a rather rigid and extremist subsection of Mandalorian culture.

The Mandalorian has done a great job as explaining this warrior-religion gradually with these kinds of sparse details, and we can’t help but wonder if Season 1 might end with a touching moment where Mando shows his real face to Baby Yoda. It would be the ultimate moment of vulnerability in such a proud warrior. We’re also more curious than ever to learn more about the attack that orphaned Mando.

Where was he from originally? Why exactly did the Separatists attack? How did he come to be adopted by these Mandalorians? We can’t wait to find out.

New episodes of The Mandalorian are added to Disney+ Friday mornings.