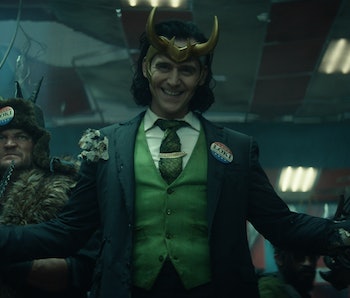 Loki has spent ten years in the Marvel Cinematic Universe breaking things. This time, in his own Disney+ series, he’s going to fix something: Time itself.

With a new full trailer for Loki now online, here’s what we’ve learned about the next Marvel series streaming June 11 on Disney+ (after The Falcon and the Winter Soldier completes its run).

What Happened? — On Monday, Marvel Studios released the trailer for Loki, the third MCU series on Disney+ in 2021. The show stars Tom Hiddleston back in the horns of his popular Marvel villain Loki, the brother of Thor. While Loki died in Avengers: Infinity War, you’ll recall that in Avengers: Endgame, a Loki from 2012 successfully stole the Tesseract after the Battle of New York.

In Endgame, this forced the Avengers to travel back even further in time to obtain the Space Stone. But that still left a 2012-era Loki (a “variant,” as he’s labeled in the trailer) running around time and space. Loki is what happens when Loki gets caught.

You can watch the trailer for Loki below.

The Time Variance Authority (TVA), a secret agency whose job it is to monitor time, are not pleased with Loki. That’s how TVA agent Mobius M. Mobius (Owen Wilson), a minor character from the comics who for sure is not Mephisto, tasks Loki into correcting the timeline. Gugu Mbatha-Raw also appears in the trailer as another TVA agent working with Mobius.

As chaotic as Loki himself, Loki zig zags all around time and space. In the trailer, we see Loki appear in mundane locations like an Amazon-esque big box store “Roxxcart” (a possible connection to Roxxon, an oil giant in the MCU) and a local renaissance faire before zooming out to post-apocalyptic wastelands and faraway alien planets, including Asgard. There is no one “setting” for Loki except the wide-open MCU. Who knows where Loki will actually end up?

Will Loki die? Again? — Something to keep in mind with Loki is that it’s a TV series starring a character who died, back in 2018’s Avengers: Infinity War. The new show stars a “variant” Loki who is living on borrowed time. After all, if the premise is Loki restoring the timeline, won’t that include restoring the moment of his death at the literal hands of Thanos?

While casting a comedy star like Owen Wilson alongside Hiddleston is a specific choice to ensure laughs, Loki could very well be another emotionally-charged Marvel series in the spirit of WandaVision that wrestles with themes like fate, inevitability, and free will.

There are a few telling shots in the trailer that appear set on a planet eerily similar to Vormir (and yet another lingering look at someone who may or may not be Black Widow), where the Soul Stone can be obtained at great personal cost. One can bet that Loki will challenge its title character to the point it’s doing some, ahem, “soul searching.”

The Inverse Analysis — Whether Loki is a laugh riot or not, it is shaping up to be another strong action-comedy from Marvel Studios. With a visual style that fuses the scope of Lord of the Rings with the midcentury sci-fi aesthetic of the 2019 video game Control (which similarly shares Loki’s matter-of-fact sense of humor about an office workplace forced to deal with the supernatural), Loki has just become the must-see Marvel series of the summer.