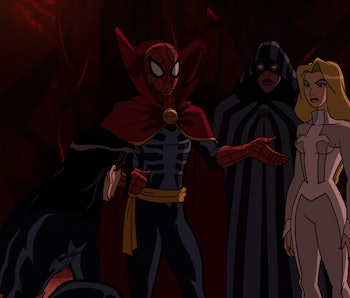 Is Marvel’s Cloak & Dagger TV series, set to premiere on Freeform next year, part of the Marvel Cinematic Universe? While Tandy Bowen and Tyrone Johnson (played by Olivia Holt and Aubrey Joseph, respectively) may never meet Iron Man or come face-to-face with Thanos, their troubled world does intersect a little with the whole MCU.

At the end of the trailer for Cloak & Dagger, Tyrone — who has a superpowered cloak that can teleport him anywhere — wakes up on the roof of a Roxxon Corp building in what looks like New Orleans. If the name “Roxxon Corp” sounds familiar, that’s because it’s an oil corporation that’s been mentioned several times in shows like Agents of S.H.I.E.L.D., Agent Carter, and Daredevil, as well as in films like the Marvel One-Shot A Funny Thing Happened on the Way to Thor’s Hammer and all three Iron Man movies.

In the Marvel Universe — both in comics and in the interconnected movies and TV shows — Roxxon is a stand-in for massive petroleum corporations like ExxonMobil. It often appears as gas stations, like in the episode “Repairs” of Agents of S.H.I.E.L.D. In the second episode of Agent Carter, Roxxon CEO Hugh Jones is played by Ray Wise as a former friend of Howard Stark’s.

Roxxon is also mentioned in the Netflix shows. In Daredevil, a flashback to Matt Murdock and Foggy Nelson’s internship at Landman & Zack reveals their firm, representing Roxxon, is suing a former employee who developed cancer while working at a Roxxon plant and revealed precious company secrets. In Iron Fist, Harold Meachum says the Hand used Roxxon to help them traffick their drugs.

As for the movies, they’re predominantly seen in the Iron Man trilogy, often in the background (Iron Man) or as a racecar sponsor (Iron Man 2). In Iron Man 3, it was a Roxxon tanker that was responsible for an oil spill that “no fat cat” was held responsible for. An accountant for Roxxon, Thomas Richards (Tom Virtue), is kidnapped and executed by Mandarin.

And yeah, Agent Coulson (Clark Gregg), who went from Iron Man 2 to The Avengers to a starring role in Agents of S.H.I.E.L.D., stopped at a Roxxon gas station in the short film A Funny Thing Happened on the Way to Thor’s Hammer, which was released on the Blu-ray of Captain America: The First Avenger.

So, while it seems unlikely that Captain America or Spider-Man will ever team up with Cloak and Dagger like they have in comics, at least there are still threads connecting these disparate heroes into one universe.

Marvel’s Cloak & Dagger will premiere on Freeform in 2018.