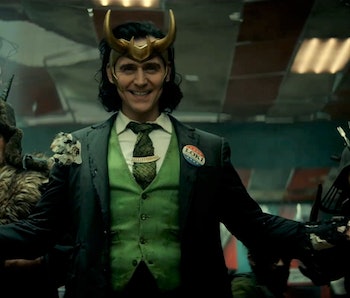 Disney+’s Loki could turn the God of Mischief into a hero — and quite the unexpected one for some of Marvel's other mightiest heroes, at that.

Tom Hiddleston’s Loki has been a favorite amongst Marvel fans ever since his introduction in 2011’s Thor, and while the character has already played an important role in the MCU up until this point, he’s getting his biggest spotlight yet in the upcoming Loki series for Disney+.

Following the version of Loki that escaped with the tesseract in Avengers: Endgame, the series promises to incorporate elements of time travel and alternate realities in some interesting, zany ways. One Loki fan theory even predicts that the Disney+ series will use those elements to send the God of Mischief on his most surprising mission yet: saving the Avengers.

The Theory — This Loki theory comes courtesy of one Redditor who believes the show’s titular Asgardian will save the Avengers from extinction in the series. The user speculates the show will see Loki picked up by the Time Variance Authority (TVA) — an already confirmed fact — and forced to choose between languishing time jail or helping out with the growing multiverse problem.

According to the Redditor, the problem will involve a mysterious villain — probably the hooded figure seen briefly in the Loki trailer — threatening to throw the entire multiverse into (wait for it) madness.

The theory predicts the show will follow this hooded villain as they eliminate the Avengers from various different timelines in order to create alternate realities where Earth’s Mightiest Heroes never get together or succeed in their battles. As a result, Loki will be forced to stop this plot by saving the Avengers across multiple timelines.

A Reluctant Hero — Loki transformed and changed a lot throughout his time in the MCU, but it’s important to remember that most of his emotional growth happened in Thor: The Dark World and Thor: Ragnarok. That means this upcoming version of Loki is still the wholly selfish character he was in 2012’s The Avengers. With that in mind, it’s easy to see why he wouldn’t want to save the Avengers — at least, not without proper incentive.

Assuming the Disney+ series really does follow Loki as he saves different versions of the Avengers across the multiverse, there are a couple of ways the TVA could convince him to do so. One possibility, which the theory itself suggests, is if the TVA shows Loki his future in the original MCU’s timeline, specifically his brief rule over Asgard after Thor: The Dark World and his heroic efforts in Ragnarok, but not his death at Thanos’ hands in Avengers: Infinity War. If that bears out, then it could open the door for some major drama between Loki and the TVA at some point in the series, should he discover the true nature of their deception.

The theory also suggests that the ultimate goal of the show’s mystery villain will be to tear enough holes in the fabric of the multiverse for Kang the Conqueror to enter the MCU’s prime reality. That makes sense since Kang is a villain whose plans often involve hopping around time and traveling through different realities.

We also know that Jonathan Majors will be playing Kang in Ant-Man and the Wasp: Quantumania, so there’s certainly a chance that Loki’s time travel and multiverse hijinks could set up Kang’s introduction in the MCU. Although, it’s also possible that — as some theories and reports have stated — the villains Loki will be facing in the Disney+ series are actually alternate reality versions of himself.

The Inverse Analysis — There’s a lot about Loki that we still don’t know, and since the series isn’t set to premiere for another few months, it’s unlikely we’ll learn new details about it any time soon. With that being said, making Loki save the Avengers multiple times is an interesting idea for the series — one that would see it adopting a level of dramatic irony befitting of the character.

If Loki’s multiverse-centric story really does set up the introduction of a major villain like Kang, then the series could also end up playing just as important a role in Phase 4’s overall story as WandaVision. With that said, if Loki ends up being little more than Hiddleston’s God getting into so much historical Mischief, and nothing bigger? No complaints over here.

Loki is set to premiere June 11th on Disney+.