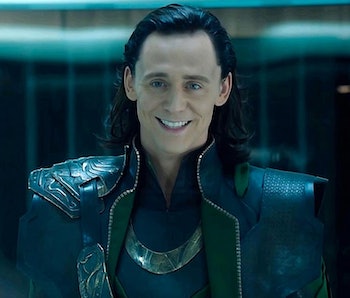 Loki will be carving out his own space in time. During the events of Avengers: Endgame, an earlier version of the Trickster God got his hands on the Cosmic Cube (aka, the Tesseract) and vanished completely. His disappearance is essentially the catalyst for his upcoming Disney+ series. While plot details are largely under wraps, a new leak suggests that Loki could revisit classic sci-fi trope that's been used to dramatic effect in DCTV and Rick and Morty.

The first Loki trailer revealed that the Time Variance Authority — a bureaucratic agency responsible for monitoring multiple timelines realities — would be involved and that the God of Mischief would be arrested by them at some point during the show. Shortly after, Richard E. Grant was cast in an undisclosed role and that led to speculation that he was playing the older version of Loki (the resemblance is uncanny).

Meanwhile, set photos hinted at the introduction of Lady Loki, the female version of the trickster god. With all that in mind, it’s possible that there will be several iterations of the character running around. That wouldn’t be surprising considering that Loki does involve different timelines and realities. However, we may have just gotten confirmation, thanks to IMDb.

The leak lists Dave Cutler as Grant’s stunt double, which seems to corroborate reports that the actor will appear in one episode. The leak also reveals that Grant is playing Classic Loki, which could be a reference to the earliest version of the from 1962’s Journey into Mystery #85. Taking it a step further, Murphy’s Multiverse theorizes that Classic Loki is one of the founders of the TVA and that the episode he shows up in will include a Council of Lokis.

The council is an iconic sci-fi trope that has been used in The CW’s The Flash, the animated Rick and Morty, and the Fantastic Four comics (among several others). On The Flash, Cisco Ramon sought the help of Harrison Wells’ multiversal doppelgangers, collectively known as the Council of Wells. In Rick and Morty, the Council of Ricks was a governing body made up of several Ricks from different dimensions to defend themselves from enemies. They, much like the Council of Wells, were dysfunctional and pretty terrible at their jobs. Though not a sci-fi show, How I Met Your Mother also employed this trope for laughs.

How will this impact Loki? The Council of Lokis may come into play once Classic Loki and the others realize what Tom Hiddleston’s version has been up to, be it dimension-hopping, stirring up chaos, or both. If Classic Loki is indeed the founder of the TVA, then his control over the various realities gives him immense power and reign. He may be inclined to offer some of that power to a younger version of himself.

Conversely, The Avengers version of Loki may actually be Classic Loki. After all, he’s already been removed from his original timeline and he could have traveled back in time to establish and guide the TVA to do his bidding. TheThis would certainly explain why Loki’s been picked up by the TVA in the trailer. There’s a chance the council isn’t exactly organized, but Loki has always been pretty strategic about his plans. It’s what makes him such an enticing villain and, with all of time and space at his disposal, Loki is just getting started.