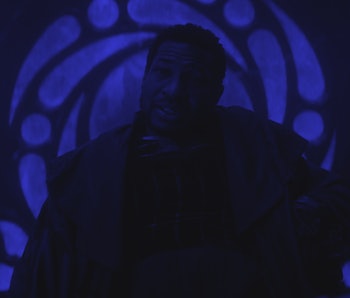 Now that Kang the Conqueror has arrived in the Marvel Cinematic Universe, when will we get to see him again?

That question has been on the minds of Marvel fans ever since the villain (played by Jonathan Majors) made his quasi-debut in Loki Episode 6. Indeed, the Disney+ show’s Season 1 finale didn’t just conclude with the creation of a new, sprawling multiverse, but also with the suggestion that Kang’s dominance was already starting to take hold.

However, while it’s clear that Kang now exists in the MCU, it’s still unknown how Marvel’s next films and TV shows will incorporate the villain into their own narratives. Fortunately, Loki may have already set up how one of Marvel’s biggest upcoming projects will further establish Kang in the MCU.

One of the biggest Kang Easter eggs that Loki dropped prior to the character’s debut in its season finale was the brief appearance of Qeng Tower in its fifth episode. The tower in question seemed to be one of many relics from a branch timeline that had been pruned by the Time Variance Authority — one in which a company known as Qeng Enterprises likely bought Avengers Tower from Tony Stark.

That was notable at the time because Qeng Enterprises is a company in Marvel comics created and owned by a man known as Mister Gryphon, who actually happens to be a version of Nathaniel Richards... a.k.a. Kang the Conqueror. Created thanks to a glitch in the timestream, the Gryphon version of Kang wound up stranded in the 21st century. Intent on furthering his pursuit of power, Gryphon decided to build his own empire in modern times and founded Qeng Enterprises in order to do so.

Had the multiverse not started expanding at the end of Loki Episode 6, the appearance of Qeng Tower in the Disney+ series’ fifth episode might have seemed like nothing more than a fun Easter egg for comic-book obsessives. Now that the MCU contains different realities, there’s a chance that Qeng Enterprises could come back into play during a future MCU film — namely, this year’s Spider-Man: No Way Home.

Spider-Man: Homecoming found Tony Stark selling Avengers Tower, but neither Homecoming nor Spider-Man: Far From Home reveal who Tony sold the building to. That’s always seemed strange to Marvel fans given the tower’s significance within the MCU, but it’s possible that Marvel had been intentionally holding off on revealing its new owner until after it had introduced Kang.

Why? The fracturing of the multiverse that’ll take place in Spider-Man: No Way Home could result in Kang going back in time to 2016, founding Qeng Enterprises in New York City and buying Avengers Tower. That’d be a major move for the villain, putting him in a prominent seat of power within the MCU; the symbolic significance of Kang taking over the Avengers’ former headquarters speaks for itself.

To speculate further, it’s possible that No Way Home will find Peter Parker (Tom Holland) stranded in an alternate reality — joined by alternate versions of himself — in a timeline where Avengers Tower is Qeng Tower. That’d make sense, given No Way Home’s title and would work well coming off the ending of Loki Season 1, which ended with Loki (Tom Hiddleston) trapped in a timeline ruled by Kang.

Either way, that means Majors could show up in Spider-Man: No Way Home, either as Kang himself or as a version of his Mister Gryphon persona from the comics. In fact, since the Loki Season 1 finale established that there are multiple Kang variants scattered throughout the multiverse, it’s possible that Majors’ No Way Home cameo could be the next in a long line of MCU appearances not necessarily by one Kang but his variants.

The Inverse Analysis — The only Phase Four title that Kang is confirmed to appear in right now is 2023’s Ant-Man and the Wasp: Quantumania, but there’s no reason to believe Marvel fans will have to wait that long to see him again.

Thanks to its multiversal storyline, Spider-Man: No Way Home feels like a prime candidate for a Kang cameo of some kind. Based on the appearance of Qeng Tower in Loki Episode 5, it feels likely that No Way Home’s Kang cameo will see him assuming one of his many alternate identities from the comics. After all, Marvel’s Spider-Man movies have placed a heavy emphasis on Avengers Tower. A twist like this could work as the ultimate payoff.