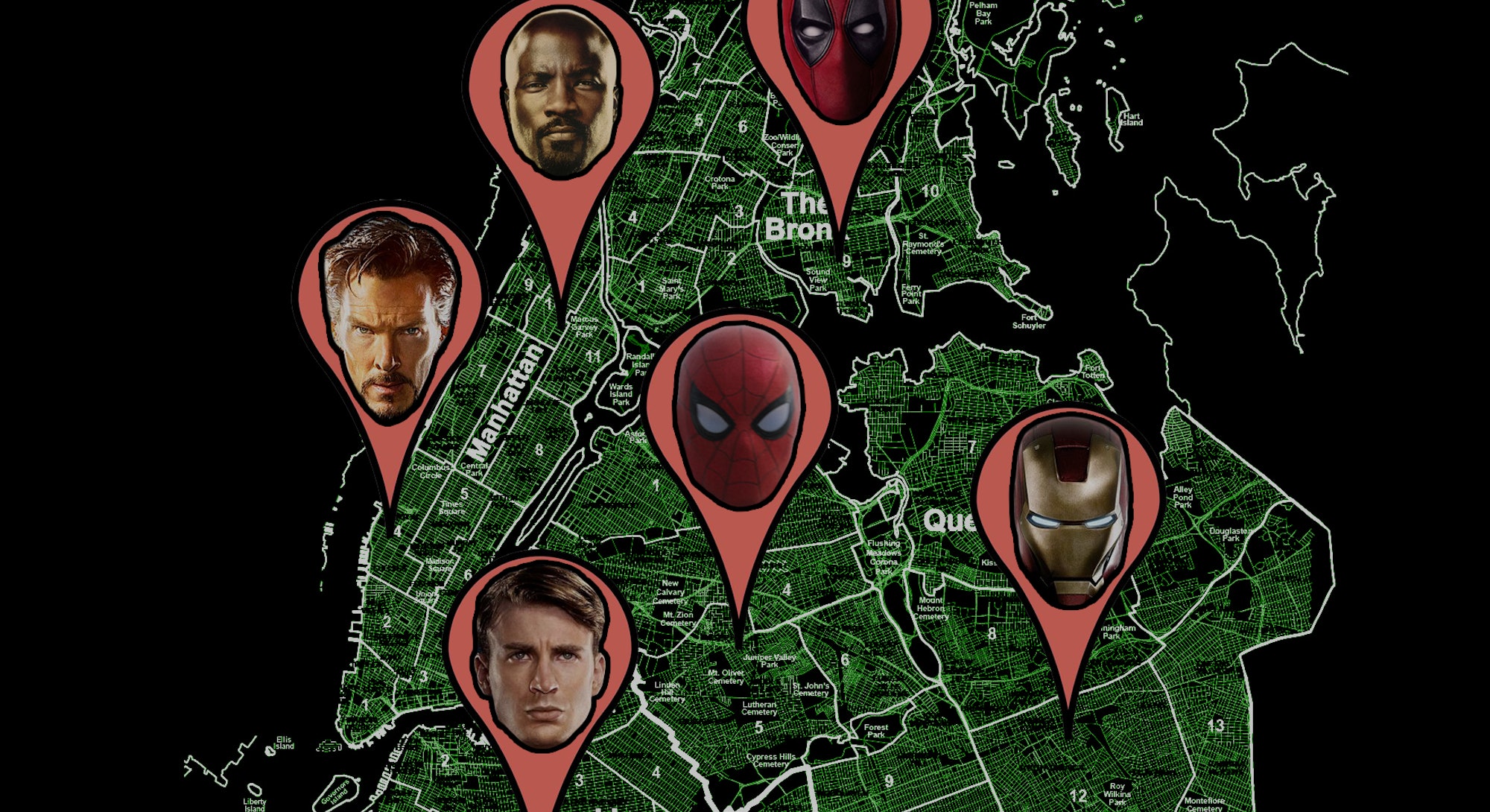 Many of Marvel’s superhero films have been set in New York City, and yet it’s hard to find a map that shows where the events of the films actually take place. We’ve created a map of the so-called Marvel Cinematic Universe using Google Maps, which we’re calling “Inverse’s Marvel NYC Map.” The collection of MCU events extends north to suburban Westchester County (where Charles Xavier founded his Institute) and south to Staten Island, where The Hand trains its youngest recruits in Iron Fist.

Though Deadpool purposefully makes it difficult for fans to figure out where all of its action takes place, we went ahead and added events from his first movie to the map, too.

What the Map Teaches Us

Here are a few of the points of interest we discovered while plotting events.

9. The Chitauri invasion in The Avengers definitely would have leveled Jessica Jones’s mid-town apartment. She’s not nearly as angry at the Avengers as she appears to be in Jessica Jones Season 1.

8. The citizens of Harlem in Luke Cage should have been discussing how Hulk and the Abomination nearly destroyed the Apollo a few years before Luke showed up.

7. Given that Deadpool probably lives in the Bronx, it’s likely that Luke Cage is aware of his antics and he’s probably annoyed.

6. Matt Murdock and Foggy Nelson probably ran into Luke while they were attending Columbia Law School near Harlem.

5. Given the dialogue in The Avengers, there’s really only one possible shawarma restaurant for Tony Stark to bring his buddies to, and it’s, as he says, “two blocks” from where he touches down with the Hulk.

4. When Madame Gao and Kingpin discuss their evil plans in Daredevil, they probably should have pointed to the Rand Industries building, which is definitely within eyesight of their meetup spot. As in, “Yeah, let’s mess with Danny Rand now, who’s probably … over there.”

3. The lit-up restaurant where Matt Murdock takes Karen Page on a date is super close to Luke Cage’s bar. They probably could have gone in for a nightcap if the Defenders had been formed already.

2. Jessica Jones’s best friend, Patsy Walker, lives dangerously close to Kilgrave. Considering how often Jessica and Patsy talk in whispers about what he did, they’d be even more frightened to know he was chilling a couple blocks away.

1. Peggy Carter clearly planned out her life according to Steve Rogers after he “died.” Her favorite diner is right by the hospital where he was born, and her apartment is right by the S.H.I.E.L.D. secret headquarters where he wakes up decades after she’s bedridden.

Once we put together the clearly-defined events of Marvel’s Netflix TV shows and Disney movies, we were left with the events of Fox’s films, including Deadpool.

Figuring Out the Deadpool Map

Before releasing the map, we had to solve the Deadpool problem. Though Deadpool (2016) almost certainly takes place outside New York City, Fox and Marvel were so dedicated to keeping it out of the MCU’s primary timeline that all of the street signs that would have indicated each scene’s location in New York were changed to comic book artist and writer names.

Though we can’t pinpoint where the events of Deadpool take place, we’ve added an optional set of pins for the best estimates we were able to muster, given the fact that Deadpool visits Xavier’s Institute in Westchester without flying. Some comics put Deadpool’s adventures in Chicago, but because the film doesn’t specify, we can assume he’s in New York.

When Colossus watches the news early on in Deadpool, he overhears a journalist say, “shots fired on the crosstown expressway.” If Deadpool’s first fight scene occurs on the Cross Bronx Expressway, and the visuals indicate that three separate highways are overlapping where he jumps into a car, we can assume he’s fighting in Schuylerville in the Bronx, where 678, 95, and 295 all merge.

Now, because Dopinder tries to charge Deadpool $27.50 for his New York City cab ride to this location, and NYC cabs currently charge $2.50 per mile, plus the “standard City fare rate of $3.30, which includes a 50-cent State surcharge and a 30-cent Improvement surcharge.” From that, we can assume that that Deadpool’s apartment with Blind Al is within a 9.36-mile radius of that drop-off point. It is, therefore, extremely likely that Wade Wilson and Al live in the Bronx.

On Wade and Vanessa’s first date, they visit an indoor arcade that appears to have both skee-ball and a bowling alley. That narrows the number of bars-with-games down quite a bit. If this locale is close enough to Hellhouse, aka “Sister Margaret’s School for Wayward Children,” and isn’t a shiny, brand-name establishment like Dave & Buster’s or Chuck E. Cheese’s, it’s probably Fun Fuzion in New Rochelle.

Figuring out Hellhouse’s location proved more difficult, but a throwaway joke Wade makes when speaking to Agent Smith — “we’re within 50 yards of a school” — can be taken as gospel (though it’s probably not). That means if Hellhouse is in the Bronx, and if it’s close enough to Fun Fuzion, we can assume Wade is jokingly referring to the North Bronx, where most schools in the borough relocated. That also means Vanessa and Wade were close enough to Fun Fuzion upon meeting at Hellhouse that they traveled the short distance to play skee-ball.

When Wade follows Vanessa from work to her old apartment, we see that it’s most likely in Chinatown, as all the signs Vanessa passes are written in Chinese. (You’ve already suspended disbelief long enough, so ignoring the fact that these locations don’t look anything like actual New York Chinatown shouldn’t be an issue.)

The final fight scene in Deadpool takes place at a maritime port near the rest of the film’s events, and there’s one large highway near it. Considering those landmarks, we can assume it could take place at Port Morris in the Bronx.

The Mapping Has Only Begun

We’ll add locations from each new episode of The Defenders. Also, Spider-Man: Homecoming will be largely set in Queens, so the events of that film will help us flesh out Peter Parker’s corner of New York City. As of this writing, we have included Peter Parker’s high school, and the location of one of his movie posters (overlooking the Avengers Tower) on our map, but we’ll add more come July.

Thor: Ragnarok will spend a very short time in New York City, as the post-credits scene in Doctor Strange indicated, and Infinity War could include a scene or two in the Big Apple, though reports say both of those films will take place in space, for the most part. Agents of S.H.I.E.L.D. isn’t currently represented in full, so we may add locations from the show to the map in time.

As for future Marvel TV shows, we’ve included the location of Squirrel Girl’s fictional alma mater and Port Authority, where Cloak and Dagger typically meet in comics canon. Legion does not take place in New York City, and neither will Runaways. Marvel’s as-yet-untitled X-Men show will likely take place in Westchester, so the events of that show could feasibly create new locations on our map. Inhumans could potentially add locations as well.

If you have tips for Inverse’s Marvel NYC Map, please shoot an email to marvelnyc@inverse.com.