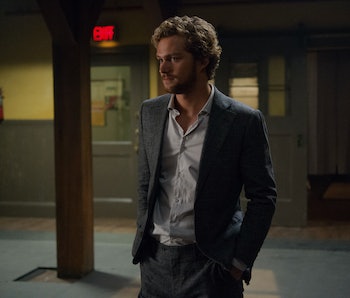 Even with alien planets like Thor’s Asgard and Xandar in Guardians of the Galaxy, the Marvel Cinematic Universe usually fixates on New York City. That’s where the Chitauri invasion in The Avengers took place, a watershed event which still haunts the MCU five years later. But Marvel’s offerings on Netflix, of which Iron Fist is the latest, dials back on the spectacle in favor of an earthly approach, portraying New York neighborhoods like Harlem and Hell’s Kitchen as self-contained, unique worlds. But, in Iron Fist — which stars a billionaire white man who knows kung fu — the one neighborhood that should be prominent, Chinatown, is as empty and colorless as the show’s emotional core.

The Marvel Netflix series was burdened with criticism even before it premiered. The casting of London-born Finn Jones as Danny Rand, though canonically faithful to the character’s original, Caucasian identity, opened the floodgates for a conversation about white savior tropes and cultural appropriation. In the age of comic book adaptations, a white actor leading Iron Fist was insurance to keep Marvel purists interested at the expense of fresher storytelling. That’s an odd move for Marvel, which updates its material frequently to suit modern audiences. Iron Fist’s lack of self-awareness extended beyond its casting to the part of the show that actually tried to incorporate Asian-American culture: Chinatown.

Colleen Wing, the only Asian-American protagonist on the show, is also Danny’s only connection to Chinatown. Her dojo provides a roof over his head, and then later a place to train, fall in love, and plan dangerous missions against the Hand. The majority of Danny’s adventures take place in the Financial District, the realm of the 1% and the Meachums, as he battles to reclaim his company. Because of Marvel’s decision not to update Iron Fist’s appropriative origin story, in spite of the fact they’ve racebent (Nick Fury) and genderbent (Jeri Hogarth) before, the only ways to pay homage to the real Asian cultures and people Iron Fist draws from is through Colleen and Chinatown.

New York’s Chinatown, the historic East Asian enclave in Manhattan — Danny’s home turf — could have been what Harlem was for Luke Cage or Hell’s Kitchen for Daredevil. Despite the fact the show was shot on location in Chinatown, Danny spend his time interacting with timid gangsters inside generic Chinese restaurants or inside Colleen’s outrageously spacious dojo.

Only once does Danny spend any significant time among locals in Chinatown, and it’s a scene ripped straight out of a spy movie. In the end of the first episode, Danny tries to evade assailants in a parade. It’s a smart move, but the parade — the only time Chinatown ever comes to life in Iron Fist — is uninspired and devoid of sharp, eye-catching visuals. Even the dragon dancers look bored. At best, it can be described as an exotic backdrop, simply in place to put color on a desaturated screen. The scene gives no indication of what Asian-American life is like beyond the fact that, yes, there are holidays.

Even scenes set in Colleen’s dojo, which look like a multi-cultural, mini United Nations when her class is in session, are stripped of any of the surrounding Chinatown culture. There’s no sense of what the modern Chinatown teenager is like. Are they really going to be Googling cage fight videos while in kung fu class? Or are they more likely to be talking shit about Ghost in the Shell? The intrinsic struggle to both connect with and subvert Asian culture through American-born eyes isn’t there at all.

It’s a wasted opportunity to show Asian-Americans that Marvel does, in fact, give a shit. Not that having an authentic representation of Chinatown would have made a white Iron Fist easier to swallow, but there could have been at least some culture that didn’t come out of a grab-bag of keywords. In Episode 5, Danny brings catering from a snooty restaurant his dad used to frequent. But dude, this is New York: Food is everywhere, and a homeless person showed you how to use a smartphone. Was Hop Kee on Mott Street closed? Watching Iron Fist, I couldn’t help but think of Luke Cage and how it used Harlem and its constituents perfectly. Danny might have had Colleen’s dojo, but Luke had Pop’s barber shop, where Marvel’s Harlem heart beats as kids and old folks talk about their sports, their music, and their dreams.

The Defenders, the blockbuster crossover bringing together Marvel’s Netflix heroes, is grounded in the streets of NYC, unlike the lofty and globe-trotting adventures of the Avengers. But based on Iron Fist, the streets of New York matter less and less. In which case, what really separates these two superhero teams? Without New York City acting as an anchor, the Defenders lose their identity as the neighborhood’s localized version of the Avengers. The real Avengers are out in the cosmos fighting Thanos. The Defenders probably won’t get called up, so it matters that audiences actually connect and identify with an authentic New York they swear to protect.

Iron Fist’s problems go beyond issues of race and appropriation. But like Luke Cage and Daredevil, its storytelling faults could have been made up for in a world that feels alive. Instead, like the Iron Fist himself, New York is generic and lacks identity. A walk through Chinatown could have helped.

Iron Fist is currently available to stream on Netflix.