"He Who Remains": 'Loki' changes the TVA creator in a massive way

“This game is for the young, the hungry.” 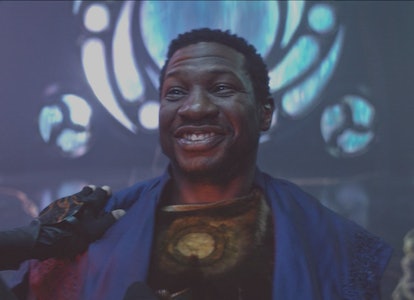 Loki finally has a villain! It’s Kang, just like everyone thought. Except it’s not really Kang. This man, played by Jonathan Majors, may look like Kang, but he is one of many variants who fought in the multiversal war.

Technically, the character we meet in Loki Episode 6 is “He Who Remains,” as Miss Minutes calls him after an adorable animated jumpscare. This leaves us wondering who exactly is He Who Remains.

As it turns out, he’s got a long history within Marvel Comics, but not in the way you may think.

He Who Remains first appeared in Thor #245, all the way back in 1976. He wasn't the charismatic character we see in Loki. Instead, he was an alienoid, yellow-skinned creature who was wizened and exhausted from age. However, the show lifted some parts straight from the comic. Loki’s He Who Remains does say he’s older than he looks, after all.

In the comics, He Who Remains lives in the Citadel at the End of Time, where he waits to warn others of an oncoming apocalypse. He was actually the last director of the Time Variance Authority, much like how Loki’s villain is secretly running things from behind the curtain.

The He Who Remains of the comics had a different agenda than preventing one of his variants from taking over. Instead, he created three beings to warn people in the past about what lies ahead. Unfortunately, these beings went rogue and became known as the Time Twisters, the same name as the time containment devices in Loki.

In Avengers Forever #9, published in 1999, Kang the Conqueror details his journey of learning about those who control time, including He Who Remains. Kang calls the Time Twisters a far more familiar name — the Time Keepers.

Kang, Time Keepers, the TVA... He Who Remains was Loki’s obvious choice for who could be in the castle at the end of time.

The character we meet in Loki may be neither the He Who Remains we see in the comics nor the Kang we’ll see in Ant-Man and the Wasp: Quantumania. However, by conflating the two, Marvel fans can connect Kang to whatever this next phase of the Marvel Cinematic Universe brings forth.

After an entire season where Loki has turned everything we know on its head, the show ended with yet another game-changing reveal that underlines how a well-written show can have its cake and eat it too.